Catalan Wikipedia is especially active with GLAM (Galleries, Libraries, Archives, and Museums) projects, but beginning in summer 2012, we started developing “Viquimodernisme“, an unprecedented wikiproject in Catalonia. For the first time, a research group on contemporary design and art history — Universitat de Barcelona’s GRACMON — and around 100 art history students at the same university have made a combined effort to improve Catalan Wikipedia’s content related to their area of expertise, Catalan modernism. 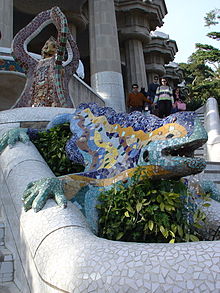 A preliminary audit (in Catalan) revealed that from both a quantitative and a qualitative point of view, modernism articles on the Catalan Wikipedia needed serious improvement. And we took other key factors into account. First, Wikipedia’s prominent position among the main reference sources when information is sought on the Internet makes it reasonable to work to provide Wikipedia readers with high quality content. Second, Catalan modernism is one of the main assets of our artistic heritage, and Wikipedia is a very useful tool to explain Catalonia to the world. Also, we cannot forget that free knowledge projects in public education entail an important social return, which makes them even more valuable. Finally, plunging on such a wikiproject involved adopting a new paradigm of academic work: assignments became an open task, a permanent, free and widely available work in progress.
The wikiproject planning was based on data provided by the preliminary audit, and once devised, it was presented to students enrolled in several subjects related to Catalan modernism (plastic arts, theatre, design…). Each student commited to edit a Wikipedia article related to the subject they were learning, aiming to obtain or get as close as possible to a featured article. We reached a lucky crossroads: students acquired new knowledge and improved their command of references; professors — members of the research group — provided the needed criterion to assess the assignments and also optimised their research by providing Wikipedia with new data, while the community had an active participation by helping inexperienced editors and intervening when it was necessary. Despite that the experience was positive, several tense situations arose among students and the community, mainly due to a lack of knowledge of Wikipedia’s working dynamics by novice editors. Also, this experience helped us to spot a flaw we need to improve as soon as possible: the need to clarify Wikimedia Commons’ operation and special features, as their command was one of the most difficult issues students had to cope with.

Currently, we can only provide preliminary results of this wikiproject, as we have just started phase 2, which will last until June 2013. During this second semester we will be glad to welcome a fourth actor, Barcelona’s Museu de les Arts Escèniques, which will participate of the wikiproject by offering students a backstage pass to high quality references. But we can state that the results of the first phase of the wikiproject have been very satisfactory and have exceeded even the most optimistic estimates. The signs determined in the preliminary audit show an astonishing growth of Catalan modernism-related articles in Catalan wikipedia, either by number and quality.
Most assignments involved creating new articles, and Catalan wikipedia currently has 416 articles about Catalan modernism available, while in late summer 2012 there were 372! Also, a survey among phase 1 students revealed they were mainly satisfied with the project and their results. Among the most interesting comments, we must stress their willingness to take part again in a similar experience and their satisfaction to know that their assignment has been something useful to the society since the very beginning.

Most of phase 1 students are willing to continue editing

Viquimodernisme is a milestone-setting project among GLAM wikiprojects. Once finished, we will be able to determine protocols and mechanisms that will serve as a reference for future similar experiences. This unprecedented collaboration between academia and Wikipedia has revealed an amazing potential, but we are only on the tip of the iceberg: things are changing, and this is a shared success!
Esther Solé (User:ESM), Amical Viquipèdia