Namibia. Just like everywhere in the countryside, schools in Omaheke Region have computer labs but nobody to use them. Polytechnic of Namibia, in cooperation with a number of academic institutions, runs a Knowledge Portal project on six pilot schools in Omaheke, and Wikipedia is on board as one of the possible hosts of local indigenous knowlege.
The Omaheke population is predominantly Otjiherero-speaking but also has a sizeable number of Khoekhoe natives, and it houses several San communities whose languages are almost extinct. Dissemination of indigenous knowledge has for centuries happened out in the field or in the village: Elders tell tales on the fire, healers take youngsters around the savanna and teach them about medicinal plants, herders share their knowledge of ruminant husbandry on the job. This is no longer working because the youth has left the village in search of jobs and a better life. Village elders still tell their tales on the fire at night, but they tell it to each other; there is nobody else left to listen.
To prevent the complete loss of indigenous knowledge in this environment, a group of researchers from several institutions in Southern Africa is investigating how technology can help. We design tablet software that can be used by the functionally illiterate, we investigate non-invasive methods to record audio and video, and we need a portal to store that knowledge. Wikipedia is a logical choice.
On the other hand, Namibia is still underrepresented on Wikipedia, and we want to enable more editors to contribute. The OvaMbanderu, the dominant tribe in rural Omaheke, have no English Wikipedia coverage at all, except a few red links. The Otjiherero (hz) Wikipedia is in the Incubator with less than 50 articles, and so is OshiNdonga (ng) and Khoekhoe (naq). All other native Namibian languages did not even make it that far. 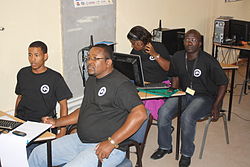 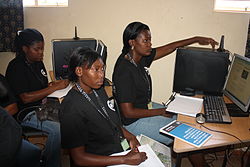 On 26-27 February 2013, I conducted the first Wikipedia training in Gobabis, the capital of Omaheke Region, for teachers from our six pilot schools. Further participants were local government representatives, the community librarian, and a few out-of-school youth. I taught them how to create an account, make edits, use references, and write in an encyclopedic style; “Wikipedia is an encyclopedia” is quite a meaningless statement for people who have never seen one.
Together we expanded one article, Witvlei, from a one-line stub to an acceptable start-class article on the English Wikipedia. The highway from the capital Windhoek to Gobabis leads through Witvlei, so I could even contribute a picture and GPS coordinates. We then went to the OtjiHerero incubator and created a few articles, one for every village the participants came from, by translating the first paragraph from the English Wikipedia.
Progress was slow at first. The lab computers were not working as expected, the participants shared a 56K dial-up connection, and as in every workshop I had so far we ran into the 6-accounts-per-day rule for account creation, this time with the additional trouble that several members never set up an email account in their life, and that there was nobody “at home” at the Account Creation team.
It was not the standard first-world workshop setting. The venue was quite hot and unventilated, fifteen people in a small room with only a tin roof, and the inside temperature about 35°C. Even after 13 years in Namibia I think I haven’t been sweating that much before. The “buffet” consisted of an aluminium pot that contained cheese rolls, and a bucket of artificial fruit juice from which one had to scoop with the only available cup. The petrol station proudly offered yesterday’s newspaper for sale. Alas, the food was tasty, the accommodation as rustic as its name (“Onze Rust”, Afrikaans for our rest), and the relationship among the participants was colleagial.
When the teachers went back to their villages, they did not yet have Internet access there. Telecom Namibia agreed to sponsor this, but it is not in place yet. Let’s hope they really teach their pupils what Wikipedia is, and that everyone is invited to contribute.
Peter Gallert, Polytechnic of Namibia