Two participants working together on the Arabic-Serbian dictionary

For the past several weeks, in the office of Wikimedia Serbia, a group of six students of Oriental studies have been working on creating the first online Arabic-Serbian dictionary. Their project, symbolically named “1001 words”, has started on February the 15th, initiated by Wikimedia Serbia and supported by the cultural centre “Nea Pangea”.

Logo of the Serbian Wiktionary

“Working on this project gives me great pleasure, because we can use the knowledge we obtained at the Faculty and turn it into something useful, not only to us, but to anyone who is familiar with the Arabic language, or wants to learn something new about it”, says Lina Aburas; the student who gathered this team. She says since this idea was conceived, everybody showed great interest and enthusiasm. “It was important to find the initiative for a project like this. All team members are good students, team workers and always ready to learn more”, says Lina. Milica Tomović shares Lina’s opinion and adds that working on this dictionary doesn’t mean a simple process of adding words as it may seem at the first glance, but that a lot of hard work stands behind it.

Her colleague Tamara Poletan adds that the dictionary is suitable for everyone since it provides basic information about each word, followed with grammatical features, etymology and examples useful for those who want to approach the subject more professionally. “This project is intended for all groups, both for ones with basic knowledge of Arabic, and for ones that are getting to know this magical language.”

Last week, after nearly a month, this group of students entered their 101st word. “These first one hundred words were only a warm-up, now it is much easier for us, and I am sure that the next hundred will be covered much faster. This symbolic 101st word gives us more enthusiasm to confidently continue with our entries,” says Tanja Milošević; one of the participants. It takes the participants about 20 to 40 minutes to cover each word, but most of the effort goes into finding synonyms, antonyms and examples. They all agree on the saying “quality over quantity”, therefore they are putting a lot of effort into making each article as complete and detailed as possible, with audio samples and illustrations.

“Arabic language is different from any Indo-European language, therefore we are trying to make a dictionary which will provide a simple and practical version of this language for all users. I know how much I as a student use Wikipedia, so I can guess how our dictionary will be useful to others”, says Tanja. 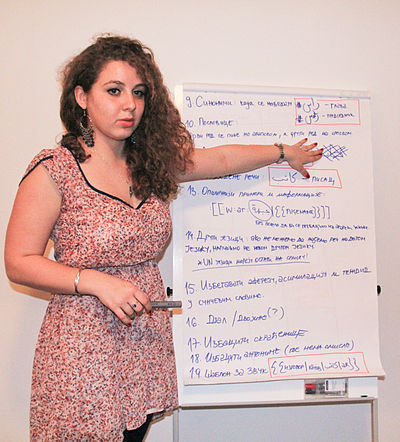 Their active participation in this project is shown in the initiative by one of the team members, Miroslav Loci, to improve the Wiktionary templates, adjusting them to the needs of the Arabic language: “Arabic language distinguishes only three cases, in comparison to Serbian which has seven. So, we had to make new templates for the cases in the form of tables, customized specially for this language.” In addition, in order to make it closer for the Serbian native speakers, guidelines for the dictionary in forms of articles are being written. “We are writing a short and useful Arabic grammar in Wikipedia followed by short guidelines in the dictionary itself”, adds Tanja.

The team is split into pairs of two, depending on what topic they are covering. After some time, they reverse roles so that the ones that were editing a group of words from biology are now checking the words related to anthropology or culture and vice versa. This way, everyone is covering the area that suits him best, and they all check each other’s work in case of mistakes.

Tamara Poletan says that gathering in the office three times a week is not difficult, but on the contrary: “We are working great as a team even though our work is divided by our area of interests. We consult each other before entering a new word in the dictionary and this way we minimize any possible uncertainties. Besides the value of the project, working here is very fun.”

All agree that their favorite moment was when they finished editing their first word with all of its details and examples. “It was a great moment, and a big relief as well. Seriously, my heart was full”, says Jovana Milošević with excitement. When asked whether 1001 words were enough, Jovana said on behalf of her team: ”This number is our lowest aim. We would love to continue working on the dictionary. Arabic is a very rich language, in a way, without limits. You can always contribute more, so from that point of view you can never have enough. However, we are trying to hit the core that can easily be branched out later.”

“Last year, Wikimedia Serbia revealed in its strategic plan that, besides Wikipedia, it wants to start developing new Wikimedia projects in Serbian. In that period, the wiki-dictionary counted around 15.900 words, but lately the number of new edited words has decreased. Therefore we decided to start this project cooperating with the cultural centre ‘Nea Pangea’,” says Mile Kis, General Secretary of Wikimedia Serbia. “Regarding project ‘1001 words’, I am especially glad that it is constantly updated with new ideas with regards to this project, but, also, completely new ideas come up. It gives me great pleasure to say that Wikimedia Serbia has six new members who are already announcing new projects”, adds Mile.

We learned from the participants that besides the forms of singular and plural, Arabic language distinguishes nouns in the form of dual, too. This was once a characteristic of the Slavic languages, but it disappeared over time. Therefore, if you wish to say “book” in Arabic, you will pronounce it “kitab”, but if you are talking about two books, you will use the dual form “kitabani”, which is different from the plural form “kutub”.