On March 13, Lua was enabled for templates on all Wikimedia wikis. The existing syntax for wikitext templates is complicated and limited: it does not offer loops, for example. With Lua, editors can now use a real programming language, in which they can also contribute to programming projects outside Wikimedia. For Wikimedia wikis, Lua means a big performance gain in widely used templates, such as citations. For example, 300 citations on an English Wikipedia article now render in 3 seconds instead of 18 seconds.

Mobile uploads launch for apps and the mobile web

On the mobile version of Wikipedia, smartphone users can now easily upload a lead image to Wikipedia articles that lack one. Also in March, the Mobile team released a dedicated app for Wikimedia Commons, allowing media uploads from Android and iOS devices.

The recipients of the first Individual Engagements Grants were announced on March 29. These grants fund projects by individuals or small teams for a duration of six months. Among the largest of the eight funded grants are “The Wikipedia Library” ($7500), which aims to give editors access to reliable sources, donated by publishers, “The Wikipedia Adventure” ($10,000), an on-wiki game for new editors, and a project to collaboratively define a vision for the future of Wikisource (10,000 Euros).

Wikipedia Zero, which gives people around the world mobile access to Wikipedia free of data charges, won the 2013 SXSW Interactive “Activism” award, beating four other finalists. Also in March, Wikipedia Zero became available to more than 55 million additional subscribers in Russia, as part of a partnership with Beeline (VimpelCom). This was the biggest launch for the Wikipedia Zero team to date. The same month, a new Wikipedia Zero partnership with Axiata Group was announced, which will expand the program in Indonesia, Malaysia, Cambodia, Sri Lanka and Bangladesh this year. 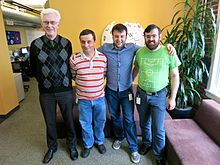 Four of the Ombudsmen during their visit at the WMF office

In March, the Foundation’s LCA team hosted five out of seven members of the Ombudsmen Commission in San Francisco, where these community members from around the world met with each other in person for the first time. They consulted with various WMF departments and provided input regarding privacy topics and the work of administrators. Formed in 2006, the Ombudsmen Commission is currently tasked with investigating complaints of alleged Privacy policy violations on behalf of the Board of Trustees. It has been proposed that the Commission should also be allowed to handle complaints about the global CheckUser policy and Oversight policy. An RfC (request for comment) about this is being prepared.

(Financial information is only available through February 2013 at the time of this report.)

All financial information presented is for the Month-To-Date and Year-To-Date February 28, 2013.

Video of the monthly Wikimedia Foundation metrics and activities meeting covering the month of March (April 4, 2013)

Phase 2 of Wikidata is becoming available on Wikipedia

On March 27, Wikidata‘s central data repository became available for use on the first 11 Wikipedias. Example: In a Wikipedia article about Yahoo!, the wikitext “{{#property:p169}}” will return “Marissa Mayer”, as she is the chief executive officer of the company. A launch on the English Wikipedia and all other language versions is expected later in April. 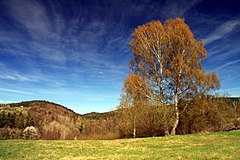 Evaluating the success of the “Mediagrant” project to document nature reserves

Wikimedia Czech Republic has published an evaluation of the success of its “Mediagrant” project, which is financed by a grant from the Wikimedia Foundation. Since 2011, this project been funding the travel expenses for photo trips of volunteer Wikimedians to protected nature areas in the Czech Republic. The purpose is to document rare plants or animals, and the area itself. 74 such trips have taken place so far, to 298 localities, and the chapter calculates the average funding cost per photo as 3.08 Kč (around US$0.16 / 0.12 €).

The WikiAfrica space in Douala, Cameroon

In an art centre in Douala, Cameroon, a computer room with high-speed internet has been set up for local people who want to contribute to Wikimedia projects. A lack of computers and online access are believed to be a reason for the low coverage of African topics in Wikipedia. Visitors to the WikiAfrica space are assisted in editing Wikipedia by trained staff. The WikiAfrica Cameroon project also involves a Wikimedian in Residence and various workshops, and is supported by the Orange Foundation.