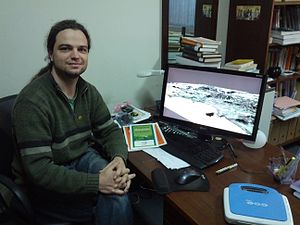 Professor Rafael Pezzi, a professor at the Universidade Federal do Rio Grande do Sul, read about a new program to support university faculty members in Brazil who were interested in incorporating Wikipedia editing into students’ assignments. Rafael was intrigued by the idea, and thought it might be a good idea for his physics course for engineering students.
“Wikipedia makes it explicit how knowledge is built: a never-ending dynamic process with conflicting opinions in a lively discussion,” he says. “Although this process is fundamental, it is ignored in the standard textbook-based class where knowledge is just given, considered as an absolute truth.”
Rafael was impressed with the level of support he received in the program, both from colleagues and from the Wikipedia community. Fabio Azevedo and Israel Rocha served as Wikipedia Ambassadors for his class. They introduced Wikipedia and motivated the students to participate in the assignment. They were also very supportive on-line, clarifying technicalities of the Wikipedia interface and introducing the participants to the Wikipedia community. 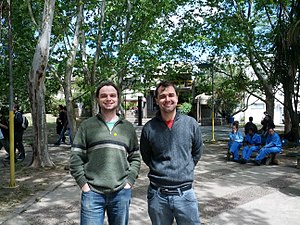 For Fabio, an editor since 2007, becoming a Wikipedia Ambassador and supporting Rafael’s class was a natural choice.
“I was motivated by using a modern teaching technique at my university, improving free content in my language, and helping Wikipedia to grow,” Fabio says. “I gave a talk on Wikipedia editing for his students in the first or second week of class. After, I replied to some emails, helping students with editing question and uploading images.”
“I must say that the help of the Ambassadors was key to making it happen,” Rafael says. “Without them it would not have happened, as I am not an experienced editor and created my Wikipedia account for this project.”
Rafael’s students really took to editing, creating or significantly expanding several important articles about physics related topics on the Portuguese Wikipedia, including articles such as Thermometer, Supercritical fluid and Interference of waves. In fact, five of Rafael’s students enjoyed the assignment so much that they volunteered to be Ambassadors for the current term.
“Basically traditional writing assignments are read once or twice and then sits in a drawer or folder archive in the professor computer,” Rafael says. “It is of limited value and does not really motivate the student apart from getting a good grade. With Wikipedia, the students have the real publishing experience and the feeling that what they write can help others understand what they are studying. Some get really motivated by this challenge.”
LiAnna Davis
Wikipedia Education Program Communications Manager