So, what has the Swedish education programme been up to since its founding in October last year? What’s been going on past these around 180 days? Well, let us look at some of the things that has been going on!
But hey, perhaps we should initially look at the overarching aim of an education programme in Sweden. The overall goal is to have Wikipedia (and other Wikimedia projects) accepted as learning tools among teachers at various educational levels in Sweden.
Employment
On 1 October, Sophie Österberg was employed as Education manager as to initiate and lead the education programme in Sweden. Then, the world’s first Wikipedian in Academy was employed the spring of 2013 by a Swedish University, Swedish University of Agricultural Sciences. We’ve recently spoken to another university here in Sweden who is quite interested in the idea of employing a Wikipedian. So we might see another Wikipedian in Academy this autumn.
Funding 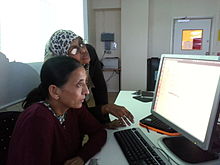 Wikipedia workshop in a Swedish class

The education programme managed to get funding for a quarter of the manager’s salary from an internet fund for a specific educational project. The project is a collaboration with an educational institution where we offer Wikipedia training to teachers of immigrants who are learning Swedish. When they’re on a more advanced level, a possibility is to translate a Swedish Wikipedia article about something typically Swedish and hence learn about a historical person or phenomenon, and writing this article in their native language on their Wikipedia language version. So far we’ve found, and had to meet-ups with the interested teachers who will engage their students in this the coming fall. Look at the list of examples of what to write about which is arguably typically Swedish. (What might a list look like on your language version? What are typical German, British, Spanish, Arabic articles?)
Invitations (at least a few of them) 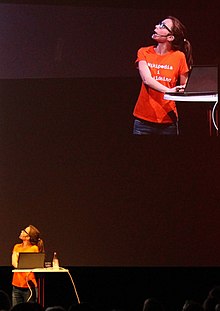 The education programme has kindly and generously been invited to various events around in Sweden, mostly in Stockholm and Gothenburg, our two largest cities. We’ve been talking at large conferences, exhibiting the education programme at various events, held seminars and co-hosted teachers evenings and various workshops. At the Internet days here in Sweden we participated in a panel discussion regarding digital resources in education. At SETT (yes, it’s like BETT and is the Swedish version of it) we held lectures on both the days of the huge exhibition. We were also invited to have a seat at the jury for a well-established school competition in April. These are a few of the events we’ve been invited to, and the invitations keep on coming! (It must be due to the amazingly gorgeous t-shirts!)
Collaborations
The education programme is supporting a network of teachers in Sweden who are using the flipped-classroom idea. There has been a lack of a good place to store these movies so Commons seemed as a rather splendid alternative. The dialogue was initiated between the education manager and one of the most engaged flipped-classroom teachers in Sweden, Karin Brånebäck, in the end of March, and the first movie is now up after a page has been created for this purpose on Commons.
Moreover, the Swedish Educational broadcasting radio (which also does TV) has had its largest ever TV production aiming at immigrants learning Swedish and the teachers engaged in their education. Through the Wikipedia education programme, a part of the production is to have teachers share their experiences, knowledge and ways to teach Swedish via Wikiversity which is promoted by the Swedish Educational broadcasting radio. They will also create a short movie about Wikiversity and how one may contribute to the project.

Ambassador programme
On 24t March, all was created that was needed for an ambassador programme, and the very first Swedish Ambassador was done with his online training on 4 May. He has now been given a lovely t-shirt and other goodies and has already scheduled a meeting with the principal of the school to discuss how the best may utilise Wikipedia at their school.
Online-education
An online-training for teachers, which looks at the pedagogical aspects of Wikipedia, the current legislation in Sweden in regards to what should happen in school and how Wikipedia fits into that context, is now on Wikiversity. The course was finalised on 22 February, and 17 people have take the online course. The first teacher succeeded with all the three tasks the other day and has now been sent a …. well I guess you know by now what we’ve sent him! 😉 He will run a programme this fall with his pupils to develop a specific article about an area that is close to their school. They will collect information and take photos, all in order to make Wikipedia better!
Travels
As a great part of the education programme here in Sweden is to inform about the possibility to use Wikipedia in the classroom through practical workshops and/or lectures, the education programme has been to 13 cities so far in Sweden. It’s actually 1,379 km (857 miles) between the cities Skellefteå in the north and Simrishamn in the south, so we’ve covered quite a bit of this long country, which is in total 1,574 km from north to south.
Programmes

A tool
The programme has so gratefully had the chance to be helped by a dedicated Wikipedian in Sweden who has developed a tool for counting a group’s contributions to Wikipedia. This is currently used by the Swedish University of Agricultural Sciences. Museums have also expressed interest in using this as it makes possible to quantitatively see what they’ve actually contributed to this wonderful encyclopedia.
And what about the fall …. ?
Some of the things that are planned are: