The Spring 2013 semester was a busy one for Wikipedia projects at ITESM-Campus Ciudad de México in Mexico, building on the success of prior work and starting new activities.

One of the medical students learning to upload images onto Commons.

Two classes of Medical English, an advanced-level English as a foreign language course for medical professionals, worked with Wikipedia in Spanish and English as well as Wikimedia Commons. The Commons project was first, with students uploading more than 60 photos related to their future professions, including photographs of hospitals, campus classrooms, and laboratory activities for their other courses. The next project was to translate medicine related articles from the English Wikipedia to the Spanish Wikipedia. Not only is this process a good way to introduce Wikipedia writing style, formatting and technological requirements, but it is also helpful to the Spanish Wikipedia, which has fewer medicine-related articles than the English version. Twenty four articles were translated including Artificial pancreas, Amaurosis Fugax, Binge drinking and Abdominal pregnancy. The final project was to create a new article or augment an existing article in English Wikipedia, preferably one with a topic related to Mexico. This effort resulted in 29 articles created or expanded including Dorsal nexus, Embryology of the heart, Instituto Nacional de Ciencias Médicas y Nutrición Salvador Zubirán, the Mexican Red Cross, and the History of smallpox in Mexico.

Salcedo95 and Aerozt present about Wikimedia and their work to a graduate anthropology class.

Students from the International Baccalaureate program at the high school level have now been working with Wikipedia for three semesters to fulfill hours needed for the CAS (Creativity, Action and Service) hours, working on various projects. Participating students for the this semester were Xibsuarz, MichiKiske17, Salcedo95, Piskysama4, Aerozt, and EdmundoGuadarrama.
They have continued to work on articles related to the ongoing project with the Salón de la Plástica Mexicana, translating articles on artists such as Álvaro Zardoni as well as creating articles in English. Following their own interests, other articles were translated from English to Spanish, such as Incidente de la colina Flagstaff, Antojito (expanded), Cheonggyecheon, Laima, Abrahadabra (Thelema), Aeon (Thelema), Tsundere, and Fujiko F. Fujio. In addition to creating content on their own, students assisted with the judging of the Holy Week in Mexico photo contest and the descriptions and uploading of the donation of 2,100 images from ITESM campus archives into Wikimedia Commons (both detailed below). 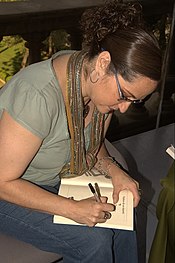 Author Susana Pagano signing a book at a presentation at the campus.

In January, a project to prepare, upload, and integrate more than 2,000 photographs from campus archives was begun. The campus is a busy one with at least one activity happening each school day, all of which are photographed for publication in campus newsletters and other outlets. As an experiment, a primary batch of 100 photographs was donated in January 2013. Students from the International Baccalaureate program and Thelmadatter worked to create descriptions for the photographs, upload them and integrate them into Wikipedia articles where appropriate. At the end of this phase, the students gave a presentation to Armín Gómez, the director of campus communications and Lourdes Esptein, the director of the campus library, impressing them with how the photographs can be used in Wikipedia and seen worldwide. This led to the authorization of 2,000 more photographs, which are in the process of description and uploading. As of this writing, more than 1,700 are in Commons, and appear in more than 100 Wikipedia articles in English and Spanish. The donation has been particularly useful for photographs of notable writers, politicians, academics and others such as José Emilio Pacheco, Patrick Loliger, Susana Pagano, Manuel Espino, Federico Reyes Heroles, and many more. It has also been useful for images related to various forms of dance, both modern and folk and sports.

Winner of the best photo category

Due to the success of last semester’s Day of the Dead photo contest, the campus library again sponsored a photo contest related to Mexican culture, this time dealing with traditions related to Holy Week. Most communities have some kind of public religious observance during this week, especially on Good Friday, and some are very elaborate and well-known in the country, such as those of Iztapalapa, Mexico City and Taxco, Guerrero. The contest attracted more than 160 photos related to the week, many of which are of high quality. There were three awards in three categories. The winner of the best photo category and the most photos category was Marcelo Sánchez Olaiz (User:Marcelolaiz) and the winner of the most original photo category was Jorge Alberto Rey Hernandez (User:A01333441jarh). The award for the best photo was an iPod Touch, for the most original photo was a gift certificate for 800 pesos and for the most photos was a gift certificate for 500 pesos.
Thelmadatter, Wikimedian Regional Ambassador/Professor at ITESM Campus Ciudad de México
Xibsuarz, International Baccalaureate student/CAS participant