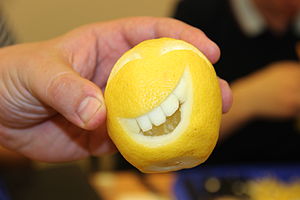 Russian University of Economics was the main venue, however the event began in the Sokol district with a tour by Wikipedian Andreykor, who wrote good and featured articles about this area. In addition to the celebration, Wikipedians Vladimir Soloviev and Sergei Vladimirov held workshops and the university held an Open Day. The university’s event organizers even enriched the celebration with a master class in carving lemons, a pun and symbol of the million articles.
The day of the celebration happened to also be the countrywide Russian day of planting forests. On this day, people planted 27 million new trees in the area of 8700 hectares during various events, setting a record in Russia. Among these trees were Alley of Free Knowledge oaks, planted by Wikipedians from the Russian Economic University, and Wikipedia Avenue pines, which will become a part of a forest destroyed by fires few years ago near the town of Roshal, in the Moscow region.
In addition to these celebrations, on May 22 we celebrated the fifth anniversary of the Sakha Wikipedia at the Permanent Mission of the Republic of Sakha (Yakutia) in St. Petersburg. Sakha Wikipedia is a project in one of the many languages spoken in Russia.
The celebrations took place amid increased public attention to the government’s attempts to blacklist several Wikipedia pages about drugs and suicide. Earlier, the Russian Wikipedia went on strike against the legislation that enables such decisions; however, what’s more important is Wikipedia’s achivements and the possibility to hold such diverse celebrations.
Anastasia Lvova, Wikimedia Russia