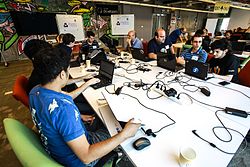 Israel has a thriving software industry, as well as a healthy Wikipedia editing community. Despite this, there are relatively few software developers in Israel who work on Wikimedia-related projects, so the primary purpose of this event was to show new people who are skilled in programming and web design how they can contribute their talents to our free knowledge projects.
Wikimedia Israel already organized a hackathon as part of the Wikimania 2011 conference, which was held in Haifa, but this was the first time that such an event was produced in Israel independently of other events.
Google Israel kindly gave us the venue – the hacking space in their Tel-Aviv Campus building, which is perfect for such events: cozy, simple, with comfortable tables, a lot of power strips and good wifi. About thirty people showed up for the event. Their skills were varied and quite surprising. There were not just PHP and JavaScript developers – these languages being the most important in MediaWiki – but also experts in DevOps, integration testing, Python scripting, data visualizations and design. 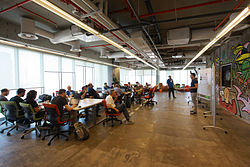 In the best hackathon style, the event focused less on talks and more on code, but I was very happy to host one guest talk by Mushon Zer-Aviv, a developer of the freely licensed Alef font, designed as a modern Hebrew and Latin typeface for the web.
So, most importantly, what did the event accomplish? Among other things: fixes for two MediaWiki bugs, both made by new developers; improved automatic tests for JavaScript components; a prototype for a script that enriches Wikipedia with data from Open Knesset, a database of information about the Israeli parliament based on open-source technology; and a new template in Lua, also made by a developer who is completely new to the language. I had the feeling that most of the participants became genuinely interested in joining the community of MediaWiki developers.
I want to use this opportunity to give my very sincere thanks to the people who helped me organize the event: Chen Davidi, Itzik Edri and Dorit Shafir-Diamant, who were instrumental in organizing the event’s logistics; Michal from Google Israel for providing the venue; and also to Yair Talmor, Chezi Reshef, Yael Meron, Elad Alfassa, Oren Held, Moshe Nachmias and Yair Podemasky, who very kindly volunteered to help with setting up the venue, handled the registration and cleaned up at the end of the day.
The event was very satisfying, and we hope to have another one soon!
Amir E. Aharoni, Wikimedia Israel