I got an idea in May, 2012, as the Eurovision Song Contest was ending and Loreen had just been named the 2012 winner, with her song Euphoria. Because Loreen represented Sweden, the 2013 contest would be held in my country. This would create an exciting opportunity for me and Wikipedia, because my home is in Gothenburg, and I could take really good photos for the Wikimedia Commons database. 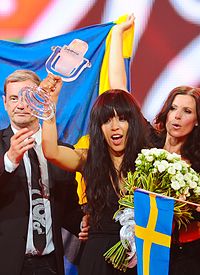 Loreen after she won in 2012.
Photo: Vugarİbadov
Licence: CC-BY-SA 3.0 Unported.

Eurovision Song Contest is well documented on Wikipedia. The contest was started in 1956, and currently has Wikipedia articles in 91 languages[1], many including information on artists and their songs, statistics, voting history, the rules and points awarded. My idea started here because there are not many photos and the quality varies; occasionally someone sitting in the audience at the show manages to take a photo with their phone, but there were not many quality images. Using the CC-BY-SA-3.0 license, anyone would be free to copy, distribute and edit my photos, as long as I am attributed and new versions of the photos have the same license.
The most common use of photos on Wikimedia Commons is in Wikipedia articles, and photos enhance the articles. My goal was to make it possible to have really good, professional photos of every artist in the Eurovision Song Contest 2013. Newspapers, magazines, websites and other media outlets that did not send a photographer to Malmö could also use my photos from the database.
I applied for photo accreditation and, at first, my application was denied because the Head of Delegation saw me as a fan and not as a serious photographer. Then some members of Wikimedia Sverige managed to explain my intentions and the purpose of my application. When I was finally approved, it meant that I had the same rights as all the other 1700 photographers and journalists at the contest.

It has been an amazing week, and a very successful project. I took thousands of photos and right now over 500 are uploaded to Wikimedia Commons. They are categorized under: contestants, countries, rehearsals and/or press conferences. All of them are also under the category Photos taken by Albin Olsson during the Eurovision Song Contest 2013. There are close-ups of almost all of the artists, photos of the artists performing their songs on stage, and also videos I filmed.
The 2013 Eurovision Song contest winner was Emmelie de Forest, from Denmark, with her song “Only Teardrops.” My photograph of de Forest has already been used in 36 different languages on Wikipedia, including Japanese and Chinese.
Since non-freely licensed material is not permitted on Wikimedia Commons, I couldn’t upload the songs or videos containing the songs, but I filmed more than 32 clips where 12 of the artists present themselves. All in English, but 11 of them in at least one other language (you can find the videos in the commons category Videos from Eurovision Song Contest 2013 and I might add a few more). It feels really cool that the Wikipedia articles don’t just have a nice photo at the top of their infoboxes, but a short video too.

The Romanian opera singer Cezar holds the record for number of languages spoken among my videos. He presents himself in English, Romanian, Italian and French.
I felt it was important to record videos in both small and large languages, to be more inclusive. The contestants speak so many different languages, and I really wanted to take advantage of that, like Eyþór Ingi’s presentation in Icelandic, a language only spoken by about 340,000 people.

I would say my little project was a success. I really feel that my photographs and videos will improve many Wikipedia articles in many languages. In a few cases, I’ve added videos to some articles in different languages myself, but, in most cases, Wikipedians all over the world have found the photos and added them here and there on their own. That feels amazing! Some wikipedians have promoted my photos and my project on Twitter. Someone wrote that there’s a toolserver page where you can see detailed information and statistics about the usage of the photos I’ve taken during the Eurovision Song Contest. Discovering how my photos are used makes me really proud. 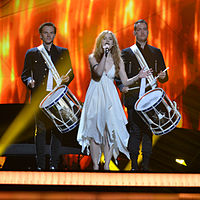 I’ve gotten a lot of support from Wikimedia Sverige. Though they didn’t send me to Malmö–it was my own idea and initiative–I borrowed the camera, lenses, tripod and microphone from them. The result would not have been as good without their help. Photographers and journalists in Malmö were very impressed and helpful when they heard I was photographing for Wikipedia. “Just tell me if you need help with anything,” was something I heard many times from kind photographers and journalists from all over the world. If the freelance photographer Stefan Crämer hadn’t helped me to turn off the auto focus light on my camera during the first rehearsal, I might have been kicked out of the arena. Helsingborgs Dagblad’s Sven-Erik Svensson kindly let me use his little step ladder during one of the rehearsals for the final.
I also got some great help from my friends who kindly translated the template I put on all my photos from Eurovision Song Contest 2013. The template explains that my photos can be used for free, and I wrote it in Swedish and English. Thanks to Sara the template is also available in Italian; Mia translated it to German, Salla to Finnish, and Stefán to Icelandic. Thank you all! 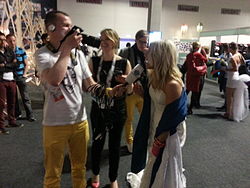 Apart from Wikipedia, I hope my photos are used in other ways too. If so, I am happy to know about it, although informing me is not required in any way. I also hope this will inspire others to take photos for Wikimedia Commons and Wikipedia, now that I’ve shown what can actually be done. If more people hear and learn about Wikimedia Commons, more people will upload photos, and more premieres, festivals, buildings, places and people will be documented with good images.
This project would have been a lot easier if people were informed about Wikimedia Commons and smaller newspapers and websites would know where to easily access free photos. Many of the Head of Press members were surprised I was there and quickly told their artists to talk to me because they know that many, many people use Wikipedia to search and find information about the artists. The German Head of Press, though, seemed really uninterested and said that “only the largest newspapers” would get the chance to interview Cascada. Wikipedia, the fifth largest website in the world[2], didn’t seem to count.
Finally. I hope that other interested Wikipedians in other countries understand that they can do this too, and maybe that I’ve started something that will continue for years to come, and not only the contest travels on to the winning country, but also the project of documenting the show. The Eurovision Song Contest 2014 will be held in Denmark. We’ll see what happens. Denmark is just a bridge away from Malmö, and I’d do this all again.
Albin Olsson, user abbedabb