We are very happy with the success of the 2012 Wikipedia fundraiser, which has demonstrated the amazing support Wikipedia readers feel for the free encyclopedia. From July 2012 to April 2013, more than 2 million people donated approximately $35 million USD to the Wikimedia Foundation to support the online encyclopedia and its sister projects.
Donations help the Wikimedia Foundation maintain server infrastructure, support global projects to increase the number of contributors, improve the software that supports our projects, and make Wikipedia accessible globally to millions of people who are just beginning to access the Internet.

We divided the 2012 campaign into two parts. More than 1.2 million donors contributed to the 2012 year-end campaign, which ran on English Wikipedia in five countries (United States, Canada, Great Britain, Australia and New Zealand). The campaign was the shortest and most successful in Wikipedia’s history. It ran for only 9 full days, down from 46 days in 2011. The most successful 24-hour period for donations in 2012 brought in $2.4 million from 145,585 donors.
In early 2013, the fundraising team worked with volunteer translators to translate the best messages from the 2012 year-end campaign, and ran banners in the rest of the world outside of the five English-language countries. We also limited the number of times people saw the messages. Readers worldwide outside of the five English-language countries saw a maximum of five banner impressions in March 2013. During the multilingual 2013 campaign, we raised approximately $7 million USD from nearly half a million donors.
Volunteer contributors are the heart of the world’s largest encyclopedia and they make it the amazing resource it is. To highlight the tens of millions of hours they put into the projects each year, the Wikimedia Foundation ran a thank you campaign with a short video that showcased some of the roughly 80,000 volunteer editors, photographers and free-knowledge advocates from around the world who regularly contribute to Wikimedia projects. The thank you campaign also included an invitation to all Wikipedia readers to get started editing.

Note: Currency shown in USD from a donation period of July 1, 2011 – April 1, 2013. Please also note: The amounts per country do not necessarily reflect the maximum fundraising capacity for each country. Once we were close to raising the goal, we ran less aggressive campaigns in many countries by showing fewer banner impressions.

Wikimedia chapters processed payments in three countries during the 2012 fundraiser. Many other chapters and volunteers around the world also participated in the fundraiser by supporting international testing and translation.

Note: Some numbers are provisional and are self-reported from each chapter.

The fundraiser had a very different look in 2012 compared to previous years. Prior to 2012, our highest earning (and most widely recognized) banner included a photo of Wikipedia founder Jimmy Wales asking people to click to read his personal appeal. Through pre-campaign testing in 2012, we experimented with a new approach by featuring key Wikipedia facts directly in the banner. This new “facts banner” performed much better than any banner we had run before – in some tests, bringing in about three times as many donations as the “personal appeal” banner.
This new facts banner was valuable for a number of reasons. By placing the key information directly in the banner at the top of Wikipedia articles, we eliminated the need to click on the banner to read our fundraising pitch, thus removing a major obstacle in our donation process. The facts banner was important to educate ALL Wikipedia readers (not just the select people who click on our messages) about who creates Wikipedia and how it operates. Banner design also changed significantly in 2012. The banner took up less screen space than our previous “personal appeal” banners and ran at the very top of the page – out of the way of the article space.

Prior to the fundraiser and throughout the campaign, we ran A/B tests of banner messages and designs to find the best-performing banners. During the fundraiser, we ran between 10 and 20 tests per day. The discovery of the facts banner and the improvements made through testing allowed us to significantly reduce the total number of fundraising days (from 46 in 2011 to just 9 full days in 2012) and to end the campaign two weeks ahead of schedule.
We’ve learned that even the most successful messages can lose their effectiveness over time. We must continually work to discover new methods of convincing our readers to donate, while educating all readers about Wikipedia and how it works. Testing of new banner messages, designs, and number of banner impressions will continue throughout 2013.
Here’s our best banner message that we used at the end of the 2012 fundraiser:

Dear Wikipedia readers: We are the small non-profit that runs the #5 website in the world. We have only 150 staff but serve 450 million users, and have costs like any other top site: servers, power, rent, programs, and staff. Wikipedia is something special. It is like a library or a public park. It is like a temple for the mind, a place we can all go to think and learn. To protect our independence, we’ll never run ads. We take no government funds. We run on donations averaging about $30. If everyone reading this gave $3, our fundraiser would be done within an hour. If Wikipedia is useful to you, take one minute to keep it online another year. Please help us forget fundraising and get back to Wikipedia. Thank you.

In 2012 we also experimented with showing banners only to users who hadn’t seen them before, and only for a limited number of views (usually 1 or 2). Based on user and social media feedback, users expressed that this lowered the impact and annoyance of banners, while still maintaining their effectiveness. This method of displaying banners will form a large part of our fundraising testing in the future.
2013 multilingual banners
The best banner message from the 2012 English campaign was translated into approximately 50 languages in January 2013. In February, approximately 5 percent of readers were shown just one banner impression in all countries (excluding the 5 English-language countries and payment processing chapter countries). We ramped up in March, showing all readers one to three impressions, until the last week of the month when we increased to five impressions. This was just the beginning of experimenting with showing readers limited banner impressions.
Thank you banners 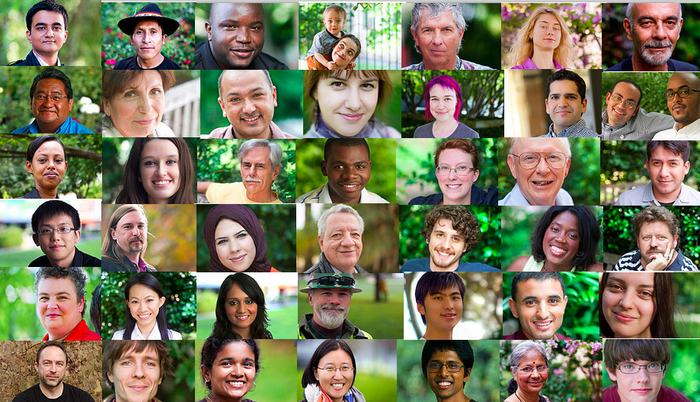 After we took down banners at the end of 2012, we ran a thank you campaign to introduce our readers to the volunteers behind the Wikimedia sites and to invite everyone to join in editing. The campaign featured a video with editors from around the globe along with other short videos and written messages from 50 Wikimedia volunteers.
The feedback from our readers was overwhelmingly positive. Here are just a few comments we received in reaction to the video:

The Wikimedia Foundation fundraiser was the topic of many media stories and countless social media mentions. Here are just a few examples of the media attention the fundraiser received:

The fundraiser is supported by hundreds of volunteers who are supported by few staff members. For 2012, the Wikimedia Foundation staff team included: