When we first looked at organising Wiki Loves Public Art (WLPA) in Sweden, together with Europeana, we figured that it wouldn’t be much different from how we had organized Wiki Loves Monuments in previous years. We would just need to get lists of all the public artworks in Sweden. As there is a government agency called The National Public Art Council Sweden (Statens konstråd), we thought all we’d need to do was contact them and get the data from them.
We soon found out that the situation was quite different. Although Statens konstråd does have lists of public artwork, they are limited to fairly recent art and only that art which the agency itself has purchased. The vast majority of the works of art are the responsibility of the individual municipalities, along with the agencies and companies charged with the maintenance of public buildings, such as train stations. There also isn’t a standardized format for how to record the works of art, nor a requirement to record them at all. Fortunately, Public Sector Information (PSI) legislation in Sweden is such that we can request this data from each of the public bodies holding the information. 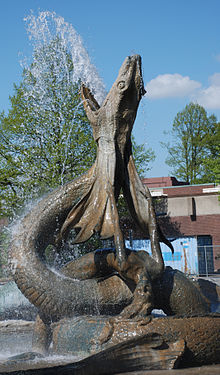 After receiving a grant from Sweden’s Innovation Agency (Vinnova), we set out to build a database that could hold all of the information we were going to collect. We also added an API to allow developers easy access to the data and to enable them to build other applications with it. We are also working on connecting the database to Wikipedia and Wikidata. This is similar to how the lists work in Wiki Loves Monuments, which provide a natural place for viewing the information and putting it in a larger context. It also allows the information to be further improved: volunteers can add coordinates, create descriptions and fix typos.
The project has also had the added benefit of making any municipality we contact aware of open data and the PSI legislation. Many of them have said that they’ve had internal discussions regarding best practices for handling requests for open data, which has spread awareness of the importance of open data within the organisations. Several municipalities were also delighted to find out that there is an interest in the public art they maintain. They have sometimes used this as an opportunity to update their own records or have expressed an interest in sharing the user-generated information that will be added to the works of art. By the time the preparations for Wiki Loves Public Art 2014 get started we expect to have a decent proportion of all public art in Sweden in the database. The generated lists should be able to serve our needs as a basis for the competition.
If we were going to run Wiki Loves Public Art 2014 the way we had originally envisioned running it in 2013, we need a centralised source of standardised information. The need for, and usefulness of, such a database goes beyond the WLPA contest. Schools can use an open database to identify local art or art elsewhere in Sweden by a local artist. Researcher could use it to look at trends in public art. Reporters could use it as an investigative tool when looking at local government spending. Adjoining municipalities could pool their resources when negotiating services, such as restoration and maintenance of works of art.
And these are just a few of the use cases we quickly thought of. The true benefit of an open database is that it can be used by anyone for any idea they might have.

Municipalities of Sweden colored based on their status in the Database. See image page for key. Image by: Lokal_Profil.

So if your country is in a similar situation where the relevant information is fragmented between many parties, perhaps this is the solution also for you. All code developed for this project is open source, making your life much easier. So the main thing you would need are volunteers to request the information and to then pre-process it into a usable form (don’t underestimate the time needed for either of these two steps!). You might even be able to find external funding for a similar project in your country.
Of course we’d be happy to share the lessons we have learned, so if you are interested just get in touch!
André Costa
GLAM-technician / Developer, Wikimedia Sverige
For more information and updates see the project page on our wiki.

A quick glimpse of some of the database features

From an early point we knew that we needed a way of clearly marking which content came from an official source and which had been user-generated. The solution was to build the database in two layers, giving you three choices in how to view the information:

In addition to this, we added a mechanism that exports all of the changes to the official information from a given source. This allows an interested municipality to import some, or all, of the corrections or enhanced information. If these are then incorporated by them, the changes are upgraded to official status.
The database is also designed to keep a record of the copyright status of the artwork as well as whether it is inside or outdoors. The result of this is that we can build lists that detect whether images of the artwork are allowed on Wikimedia Commons, and also whether these should be marked with a Freedom of Panorama template. Just what we need for running Wiki Loves Public Art in 2014!