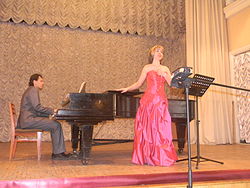 There is a lengthy tradition of translating the lyrics of renowned classical music to Ukrainian. Its early beginnings may be traced to the late 19th century, and subsequently throughout the 20th century: Rylsky, Lukash, Starytska-Cherniakhivska, and Borys Ten. However, because they haven’t been published, these translations continue to remain relatively unknown. It is exactly for this reason that Wikimedia Ukraine aims to popularize their Ukrainian translations through the publication of scores, through the performance of the works themselves and through the release of the audio recordings of these. A first step in this direction was the publication of Bortniansky’s opera Le Faucon (1786) within the World Classics in Ukrainian Project, with its Ukrainian translation by Strikha (1990).

The concert on May 15th encompassed a wide range of styles and genres. Most of the works (songs of Schubert, Schumann, Glinka, Rimsky-Korsakov, Puccini and Rachmaninoff) were performed in the poetic translation by Yuri Otroshenko. The concert featured several contemporary works by Oksana Yevsiukova, based on poems by Tetiana Cherep and Marina Popova, and a work by Andriy Bondarenko, based on lyrics by L. Carroll (translated by V. Korniyenko).

The soloists were “People’s Artists of Ukraine” Mykola Koval and Stepan Fitsych, “Honored Artists of Ukraine” Natalia Krechko, Oksana Dondyk and Oksana Yevsiukova. Andriy Bondarenko (piano), Andriy Diomin (clarinet) and Vasyl Babych (cello) were accompanists. There was much applause from the audience, and after the final “Drinking Song” from Verdi’s opera “La Traviata,” audience enthusiasm prompted the performers to repeat the song as an encore.

One of the concert’s organizers, Andriy Bondarenko, a member of Wikimedia Ukraine and the Ukrainian Composer’s Union, said that the concert was unique. “After the Kiev Opera House rejected the Ukrainian translations in the early years of independence, there was virtually no performance of classical music in our native language. Exceptions have been rare: the only opera you could hear in Ukrainian in the National Opera theatre is Rossini’s “Barber of Seville.”

In 1994, Ukrainian singer Anna Kolesnyk performed songs in the Ivan Franco theater, Kiev. Meanwhile, the results of the concert were fascinating – not only because the singers performed well, but because the audience was able to understand what they were singing about!”

Maxim Strikha, the academic and Doctor of Physical and Mathematical Sciences, wrote: “Now almost everybody accepts ‘by faith’ the assertion that opera and any vocal music ought to be performed only in the original language because it is only in this way that the unity of music and lyrics can be achieved, and no one has bothered to ponder whether this is actually true. But while reading renowned composers of the past on this subject suggests that, for example, Verdi, Wagner, Shostakovich and many other respected authors considered that vocal music should be performed in the language that is understandable to the audience. It is known how much Verdi worked on French translations of his major operas. Wagner was very concerned that the public in Australia receive an adequate idea of “Lohengrin” in English. It was not just some kind of philanthropy, but an awareness of the importance of the textual component of opera arias and romances, songs. So when someone tries to talk about the unity of music and obscures the text, then obviously these words sound deeply false.”

Another feature of the concert was its complete record for the purpose of distributing video and audio with a “free license.” In particular, the photographs and recordings we made will be released on Wikimedia Commons, licensed under the Creative Commons Attribution-ShareAlike 3.0 Unported, which includes the right to copy, distribute and create derivative works, provided attribution is given and derivative works are released under the same license.

“Ukrainian World Classics” will be the first in Ukraine vocal heritage, which now can be used freely by anyone. All the audio, video and photos recorded in this concert are stored in WikiConcert 2013 Kyiv category on Commons.