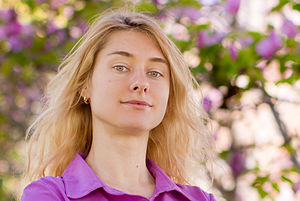 Zinaida Good started editing Wikipedia in 2008, drawn in by an assignment from her cancer genetics professor. She and her classmates were to write an article on a private wiki about a cancer-causing gene (Good picked c-Met), following the same rules as Wikipedia. While some teachers steer their students away from using the free online encyclopedia, this professor saw the value in Wikipedia and wanted his students to add to it.
When she finished her college assignment, Good’s professor thought it was good enough to upload. That experience led her to believe that Wikipedia should be in more classrooms, because, she said, it’s an excellent resource to not only get a high-level explanation of any topic, but also to find deeper sources that students can cite. She hopes that when Wikipedia is introduced in a school setting, students will add to the site, which just multiplies the amount of free knowledge available to others.
Beyond the classroom, Good champions Wikipedia for helping anyone, anywhere learn about anything, especially when they don’t have other educational resources available to them. “Knowledge is one of the most important resources you can have, it’s priceless,” said Good. “I like to be able to get access to the some of the most recent data and facts from anywhere where there is Internet, [and that] can help a lot of people who can not get access to good education.”
Though she acknowledges it can be intimidating to get started, Good wants to encourage other would-be editors to join the Wikipedia community. “It’s not apparent to a lot of people I talk to that they actually can contribute something,” said Good. “Of course, everybody can contribute something because they know something that somebody else doesn’t know.” Though Good said it was challenging at first to learn all the rules of Wikipedia, once she saw her article on the site, she realized that anyone can and should contribute to the online encyclopedia.
Good grew up in Yekaterinburg, Russia, and made her way to Canada for college. She now lives in San Francisco, California (she has finished her Master’s degree in immunology) and she works for a Silicon Valley genetics company called Genentech, doing research on the biology of cancer and trying to understand why cancer returns after treatment.
It’s been a few years since a college assignment introduced Good to Wikipedia and she’s still editing articles on biology and cancer. Watching the pageviews climb on the articles she’s contributed and edited keeps her motivated to keep writing. That and the fact that she’s helping educate the world. “You form what the world thinks by writing Wikipedia,” Good said. “It’s a scary thing, but as an editor, you help decide what the world knows, really. And isn’t that cool?”
Profile by Sarah Mitroff, Wikimedia Foundation Communications volunteer
Interview by Victor Grigas, Wikimedia Foundation Storyteller