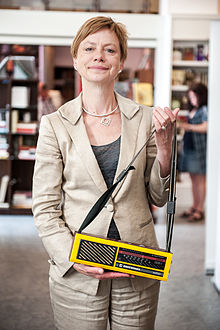 en:Sarmīte Ēlerte from Latvia was one of the VIPs present at the Collection Days’ kick-off event.

Finding great images to illustrate articles were a central part of the event.

It has already been a couple of weeks, but I wanted to explain and share some lessons learned about an edit-a-thon that Wikimedia Sverige and Wikimedia Polska organized in conjunction with the Europeana 1989 Collection Days in Warsaw, Poland.
The Collection Days are a series of events continuing through the end of 2014, where the public is invited to come and share their memorabilia of 1989, and have it digitized and uploaded online under a CC-BY-SA license. When I heard about this topic, I thought that the first Collection Days would be a perfect event for the Wikimedia movement to participate in because of the similarities of involving the general public and the use of the license. The idea was that we could try out the concept and see what worked and didn’t work, and by sharing this experience and gaining these contacts, we could help other European chapters in the Wikimedia movement to organize events in connection to future Collection Days.
With this blog post, I hope to do just that.
The goal with the edit-a-thon, in addition to writing articles together and making Wikipedia better, was to get new people and new organizations involved in the work of the Wikimedia movement. The idea is that the people who bring their objects to the Collection Days easily could stop by and learn how to edit Wikipedia and learn that their memorabilia of 1989 also might appear on Wikipedia.
The day before, I arrived with another Swedish volunteer to attend the kick-off event (with a bunch of VIPs present, who now have images on Commons!). We met with the Polish Collection Days’ organizers, prepared the venue and uploaded images that had been digitized during the day. The Polish chapter had been great at promoting the event in advance and had translated the event page to Polish.
On 9 June, six experienced Wikimedians from Poland and Sweden gathered in Warsaw for this international edit-a-thon to write about both Polish history in general and especially about the events that took place in 1989. Our goal was to use as many images that were digitized during the Collection Days as possible. I gave a short presentation about what we hoped to achieve there and then we started with fixing up some of the images uploaded the night before and writing articles (a few more images were uploaded from the event throughout the day that we worked on). The catering had some issues, but we had a great time and we were very productive, with nine new articles and 15 articles expanded on the Polish, Swedish and English Wikipedias.
We hope that other chapters will take the opportunity to organize edit-a-thons in their countries in connection with these events. After Poland, the Collection Days will be organized in the Baltic states (the plan is August, but the exact dates are still to be decided). So Wikimedia Eesti and all you volunteers in Latvia and Lithuania, be sure to contact me and I’ll help you to get in contact with the right people!

To make your work easier, I have compiled a list of lessons we learned that might help you to make the event a smashing success: