Wolfgang Moroder was skiing on December 11, 2011, near his hometown in the Dolomites when he took the photo above of a Seceda cable car with a lovely view of the Alps over a blanket of golden clouds. In the photo, which was chosen as the Wikimedia Commons Picture of the Day for 9 July 2013, Moroder framed the cable car in the foreground as it descended back into the shadows of the valley below.
Moroder  hails from Urtijëi, in South Tyrol, Italy, a town nestled in the Val Gardena, a region famous for mountaineering, skiing, biking and hiking. Moroder said that the cable car is part of a ski area connected to the “Dolmiti Superski,” a network of interconnected resorts with 450 ski lifts and over 1200 kilometers of runs, what he described as “the greatest skiing circuit in the world.” The cable car starts around 1300 meters and ascends to the top of Mount Seceda, at 2519 meters.
“I broke through the clouds on the tram and I thought this is gonna be the best picture of my life,” Moroder said. He said he hoped those who saw the picture could feel the same wonder and awe he did at the moment he took it, when he had a clear view of “the mountains as far as Switzerland and Austria.”
Moroder, who is 65, was born and raised in the Dolomites and feels a strong connection to the mountain range. He spent a few years in Tuscany and one year studying at Yale University in New Haven, Connecticut, in the United States, before returning to the mountains of northern Italy.
In his work, he is a physician specializing in prenatal care and he has raised two daughters, one who works for an online magazine and another who works as a textile designer. Though he is an avowed amateur photographer, he noted that he regularly takes pictures during prenatal ultrasounds, so in that way, he could be considered a “professional” photographer.
In Moroder’s family, photography has long been a passion. His father was involved in nature photography and maintained a darkroom in their house, where he printed his work. His grandfather was a painter who started taking pictures later in life, documenting old farmhouses in the Val Gardena. Moroder, who has been contributing photos to Wikimedia Commons since 2007, said he likes to take pictures of buildings, especially those that are historically significant, as well as artwork, landscapes and imagery related to pregnancy and medical practices. The images he takes of historical monuments are particularly important to him, given that he is the president of the local heritage museum in Urtijëi.
When asked what motivates him to donate his images to Wikimedia Commons, he said it makes him feel connected to the world around him and to an important source of free knowledge. “I feel to be part of a great global community which likes to to share visual contributions in every way for the construction of Wikipedia.”
You can see more of Moroder’s images on his user page here.
Matthew Roth
Global Communications Manager, Wikimedia Foundation 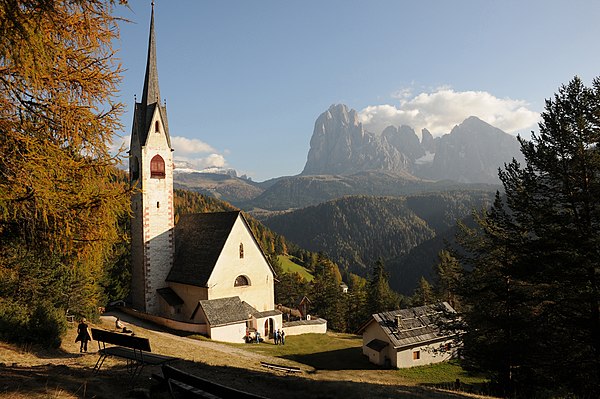 St. Jacob church in Urtijëi, Val Gardena, with the Sassolungo (Langkofel) and the summits of the Sella towers.