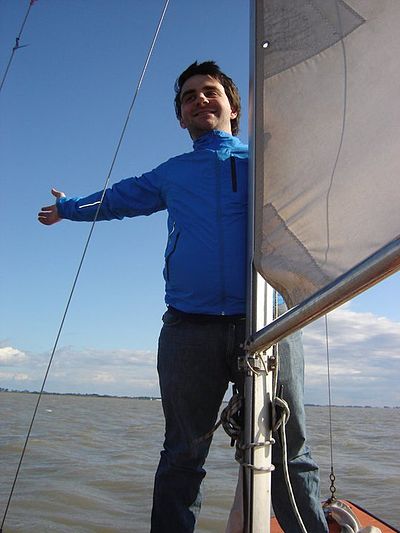 The first Wikimedian in Brussels (sailing at Lake Neusiedl)

Wikipedians are always ambassadors. Whether they edit encyclopedia articles or photograph monuments, as individuals they also always represent the shared idea behind Wikipedia – namely, the advancement of Free Knowledge. Wikipedians play a variety of roles: they actively participate on Wikimedia platforms, advise users as part of the support team, discuss copyright questions on special pages or comment on the Foundation’s draft policy guidelines. Meanwhile, other Wikipedians explore how the political and legal environment could be improved so that far more cultural and state-owned works become freely available. Dimitar Dimitrov is such a Free Knowledge ambassador. He works in Brussels, the heart of European politics. And the good news is that he works for us!
Dimi, as he prefers being called, did not take a direct route to the Belgian capital. He has lived in many different European capitals, making him truly cosmopolitan. Apart from his native Bulgarian, Dimi also speaks fluent English and German, and acquired French en passant. Multilingualism is a vital trait when dealing with EU institutions, where Babel-like confusions occur more often than one would care to admit.

Dimi’s involvement with Wikimedia Deutschland was coincidental. While the German chapter was working on its Roadmap to Brussels, Dimi was already plugging away on his proper EU Policy page on Meta-wiki, pointing out the urgent need for the entire Wikimedia network to improve its EU monitoring. The general lack of progress with regards to harmonizing copyright law during this European legislative period, which has led to an annoying copyright extension for musical recordings and a half-baked solution for the use of orphan works, gave us an extra impetus to take action rather than just talking about what could or should be done. We quickly agreed to stage an international get-together in Brussels in April 2013. Dimi did an excellent job in organising the event, which served as the kick-off meeting for the self-proclaimed “Free Knowledge Advocacy Group EU”.
This group is a still small community of Wikimedians from various European countries who primarily work on political issues that directly or indirectly influence our platforms’ parameters. These include following questions:

These questions, with the possible exception of data privacy, are nowhere near the top of the political agenda. However, they are our concerns, and we want to increase awareness of them in the medium term by being patient and working intelligently. In this context, it is essential to attend meetings with officials from the Directorates-General and members of Standing Committees of the European Parliament. We also need to take part in stakeholder dialogues and to keep an eye on legislative procedures with very complex timelines. This is why one of the first steps Dimi initiated was to start publishing a short monthly monitoring report on the advocacy_advisors mailing list.
By having such an ambassador we can not only assure greater public and political awarenes of our movement, but can also focus on maintaining a flow of information between volunteers and chapter staff. We aim to create a better basis for producing joint positions that will be have positive impact in Brussels. Undoubtedly, there is a long and arduous path ahead of us, but we are happy to tackle this route with you.

Everyone – without exception! – can get involved and help us. Volunteers can, for instance, become advocacy advisors and share their expertise on the relevant mailing list. They can produce texts for the task forces working on various issues, or they can help to write short summaries of relevant speeches and reports for the monitoring files (e.g., on network neutrality). Policy work involves mainly processing and presenting information.
It would also be helpful if volunteers could help by coding small tools. A more user-friendly and collaborative calendar for Meta (with Google functions, but in free and open WikiCode) would make our day-to-day work far easier. It would also be extremely useful to have a web crawler that copies the names and e-mail addresses of the European Parliament Standing Committee members into tables or even Wikipedia articles.
While enjoying one of those heavy beers that seem to be an inevitable part of each proper Brussels trip, Dimi jokingly proposed to name our working group the Wikimedia European Action System for Enthusiastic Lobbying (W.E.A.S.E.L). The description of this little predator pinpoints how we see our work for the years to come: with persistence, skill, and a certain willingness to fight our corner.
Jan Engelmann. Head of Department Politics & Society, Wikimedia Deutschland