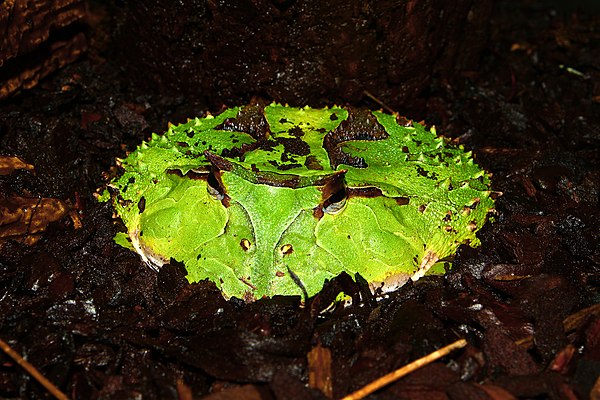 The Wikimedia Commons Picture of the Day for July 16, 2013 is a vibrant green Surinam Horned Frog (Ceratophrys cornuta). Its photographer, German native and biology enthusiast Herbert Zell, captured the image while on one of several visits to the State Museum of Natural History, in Karlsruhe, a city in Southwest Germany.
That day, Zell said, the bright green frog was in the perfect position, “sitting immobile in a nearly dark terrarium, half embedded in the ground, only the back side was visible.” Zell took three photos and merged them into an HDR image.
The Surinam Horned Frog, alternatively known as the Amazonian Horned Frog, as it is found in South America, is recognized for its wide mouth and horns protruding over its eyes.
For Zell, the interest in photography arose through his work with homeopathy. Because he needed photos of animals, plants and minerals to present during seminars, he started visiting botanical gardens, zoos and museums and gathered quite a collection of images over the years.
Zell also began to photograph his own collection of shells and started sharing his images of plants, shells and landscapes on Wikimedia Commons over three and a half years ago. “I like to make them available to others and illustrate Wikipedia,” he explained. He said that many species he had photographed weren’t on Wikimedia Commons or Wikipedia previously.
By contributing to Commons, Zell said he benefited from meeting like-minded people, with similar interest in photography, biology and paleontology. Some of them helped him identify species with which he was unfamiliar.
“It is always an honor to be featured on Commons, for it is much more than a featured picture. It is an appreciation of the photographer’s work,” he said.
You can see more of Zell’s shell images on his user page here and see his images of plants here.
Alice Debois-Frogé
Wikimedia Foundation Communications volunteer