Does it matter that women are mostly not editing the most important information resource in our world? Does it matter that one of the most important artifacts in human history tends to be written mostly by males? […] That seems to me really important, and the question for this community, for people with our skills, is: what can we do about it? We know how to redesign socio-technical communities so that they work differently: what would be a Wikipedia that was more welcoming, that worked better for women? 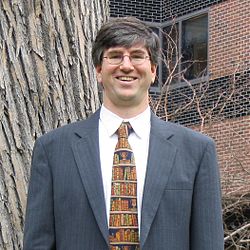 Last year, at a lecture given at UC Irvine, computer scientist John Riedl urged students and researchers not to remain passive scholars of online collaboration, but to “design tools to directly change how the world works”. At the time when he gave this advice, John was already years into a long fight with cancer. He died this past Monday, leaving among his legacy one of the most important bodies of research on Wikipedia, and inspiring a generation of computer and social scientists to think of software design as a way to build better social systems.
With his students and collaborators at GroupLens Research – the group that he co-founded at the University of Minnesota in the 1990s – John made enormous contributions to our understanding of Wikipedia, studying among other things:

John believed in Wikipedia research as a way to improve the quality and sustainability of our projects. And as a member of the Wikimedia Research Committee he also actively participated in discussions to develop policies and incentives to promote research of relevance to our volunteer communities.
He was an contributor to the English Wikipedia himself, with over 100 edits since signing up in 2005. In one of his last Wikipedia edits, John added well-cited information about promising new therapies to the article about Melanoma, the form of cancer from which he was suffering. One of his former students recalls that “he’s fought it as hard as he could, with as much knowledge as he could seek.” As with his own research, he shared this knowledge with others.
We wish to remember John for his relentless intellectual curiosity and extraordinary kindness and humanity, which made him an invaluable collaborator, mentor and friend. We owe to John much of what we know about our projects and we are immensely grateful to him for laying the groundwork for so many of us at the Wikimedia Foundation.
Dario Taraborelli
Senior Research Analyst