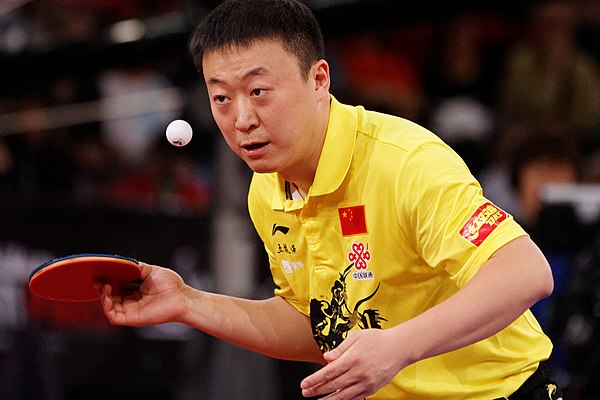 French Wikimedia Commons contributor Pierre-Yves Beaudouin captures a beautiful portrait of one of the world’s greatest ping pong player’s during the 2013 World Table Tennis Championship.
This photograph, the Wikimedia Commons Picture of the Day for 19 July 2013, was taken during the men’s doubles semifinals of the 52nd championship at the Palais Omnisport de Paris-Bercy, in France. It features Ma Lin about to serve. Representing China, Lin and his partner, Hao Shuai, lost the game to players Seiya Kishikawa and Jun Mizutani, but still won the silver medal.
Beaudouin, a Commons contributor since 2005, explains that since ping pong is a fast-paced sport with very brief exchanges, he photographed the players during their serve, when they move at the slowest speed. “During doubles, I wasn’t sure what to shoot. It’s not easy to find the right position when there are four players around the tables, two referees, TV reporters and a dozen photographers,” the Frenchman recalls about the context of this shot.
Beaudouin, got into amateur photography about three years ago, and sports photography in December 2012. In the last 7 months, he has covered 16 events, nine of which have been sporting events.
“There aren’t many quality sport photos on Wikimedia Commons and there are plenty of Wikipedia articles that need to be illustrated with images,” he says of his motivations to take and share photographs of sporting events.
Beaudouin got started on Commons by importing freely licensed images from Flickr. He’s now quite active in the wiki-community: he launched a photo group in Paris that covers events, such as sports, music, or exhibits, and he takes high quality images of objects for Wikimedia projects. He also organizes outings, such as Wikipedia Takes Your City and encourages Wikimedia France, the French Wikimedia Chapter, to invest in photographic material, which he notes is quite expensive. So he’s happy that chapters are helping in this regard and he hopes that investments in this domain will increase.

Seeing his photo recognized by his peers and featured on Commons as Picture of the Day makes him happy, for it shows what Wikimedia France is doing in the realm of photography.
But “personally, I don’t want to be in the spotlight because I could name dozens of other contributors who do a phenomenal job working on various wiki-projects,” he says.
See more of Beaudouin’s photos on his Wikimedia Commons user page here.
Alice Debois-Frogé
Wikimedia Foundation Communications volunteer