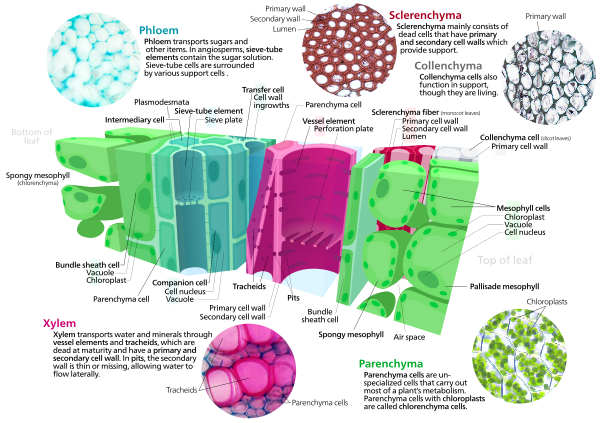 A cross section of a leaf showing the phloem, xylem, sclerenchyma, collenchyma and mesophyll.

In 2012 Wikimedia Commons contributor Kelvinsong created and contributed election-return diagrams during the United States elections to the freely licensed database. Kelvinsong credits encouragement at the time from another user, LadyofHats, for inspiring him to donate his talents and for making him one of the only scientific illustrators on Commons.
“My first science picture was a large diagram of the animal cell cycle, which somehow managed to make Featured Picture,” said Kelvinsong, who has also been surprised to find his pictures on T-shirts and coffee mugs being sold online. “Who would buy a lunchbox with the centrosome cycle on it?”
And while some illustrators might be bothered by this, Kelvinsong has a different outlook. “The concept of copyright has never really made much sense to me, and Commons is a great place to get your stuff out into the world. Not only is it awesome to be able to add your pictures to Wikipedia articles that are seen by thousands of people per day, it’s cool to see other websites pick up your pictures and use them. In my experience, 60-80 percent of them will give you credit for your work.”
Viewing himself as an amateur illustrator who also does photography, Kelvinsong has created vector illustrations since he was 13. He specializes in microscope photos and plant cell biology, though he has trouble identifying individual plants.
“Commons is severely lacking in plant microscopy photos, but I managed to find representatives of each cell type,” he said. “I take scientific accuracy very seriously, so I usually do a ton of research on the topic, and I wound up combing through a lot of plant science papers to figure out exactly what each cell looks like and to get the scale somewhat right.”
He said Plant Physiology and The Plant Cell are his two favorite journals due to their large collections and open-access policies.
To illustrate the image above, which was selected Wikimedia Commons Picture of The Day for July 27, Kelvinsong first made a wireframe render with Blender, then traced that in Inkscape. After the picture was complete, he wrote the captions and manually line broke the text, which he says is a big part of making these diagrams. Lastly, he did some grid aligning to make the image appear sharper at certain resolutions, then outlined the text so it looks good after the rendering process on Commons.

“I really had to work to keep the captions as short as possible while maintaining scientific accuracy,” he said. “I kind of overblew the perspective on that picture so only the Phloem and Xylem blocks could be made into stand-alone sub diagrams. Also, the scientists at Plant Physiology seem to be the only people who know what a phloem transfer cell looks like.”
Kelvinsong admitted he’s not a fan of the Featured Picture Candidate (FPC) judging process on Commons. From his perspective as an illustrator and photographer, he believes illustrations are judged on “the visual shapes they make at first glance.” He says this leads to comments like, “This is too complicated,” or, “This is too simple,” or, “This is too realistic.” Sometimes he gets all those critiques at the same time.
“If there exists a Goldilocks zone, I have yet to find it,” he said. Most aggravating is when a picture fails because of the FPC rules requiring enough votes.
On the other hand, he likes the free culture on Commons and the many people willing to help out with translations. “Unlike art sites, it’s good knowing your pictures have an educational purpose and will be seen by many.”
Advice from Kelvinsong to other illustrators: Scalable vector graphics masks are your friend. Also, do not use ellipses ever, circles are fine. Use a rounded rectangle “pill” shape or draw your own oval with the pencil tool.
“You should not add unnecessary borders, shading or gloss to stuff that does not require it,” he said. “I’m looking at you, MediaWiki interface. Also, no more DejaVu Sans, please.”
(View more of Kelvinsong’s illustrations on his Commons userpage.)
Donna Peterson, Communications Volunteer