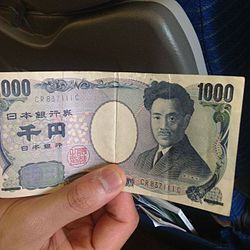 The note flown round the world

A group of five people just shared a taxi from downtown to the airport and they tried to settle the fare. A Japanese told a guy from Hong Kong that he was running out of pesos.
The Hongkonger replied, “Do you have yen? It is more easy to exchange Hong Kong Dollars from yen in Hong Kong. Nobody recognizes pesos in Hong Kong, I think.”
So the bill was settled with a 1000-yen note. The note travelled through DC, then Chicago, and arrived in Hong Kong. It stayed in the Hongkonger’s wallet for several years.
A Ramen Store in Shinjuku, Tokyo, August 2012
The guy from Hong Kong went to Tokyo, a layover on his way to Washington DC, for the same event he had attended three years previously in Argentina.
He realized his friend had given him 1000 yen that he had not yet spent, so he took the bill along with him. He took a photo of the bill with Instagram shortly before taking off at Hong Kong Airport.
Then the 1000-yen note ended up in the vending machine of a Ramen Store in Shinjuku, returning to its “Home country” after two complete trans-Pacific journeys.
His Japanese friend saw the photo online, and he was “so thrilled to see the journey of money…!”
The event connecting this yen note and these two young gentlemen is Wikimania, the global Wikimedia conference that occurs in different cities each year. This year the conference will be in Hong Kong and I confess the Hong Kong guy is actually me and I am taking a sort of leading role planning this year’s conference.
Wikimania 2013 in Hong Kong
We marvel that so many people can get together in a place for a cause, from all over the world. This year we expect over 1,000 people from nearly 100 countries, coming together to celebrate free knowledge and free culture.
Besides the meaningful sessions that make up the conference, I am always fascinated during Wikimania with how people interact and communicate with each other among the great mix of people from so many different cultures and traditions.
This little story about a yen note is the most magical experience about the conference, as well as the Wikimedia movement. We are connected to each other through the Wikimedia projects and our stories weave through time across great distances.
So come join us for Wikimania in Hong Kong, and start your wonderful experience with Wikipedia. This will probably be the only Wikimania in Hong Kong during our lifetime, so we want to show you all the splendor of our city.
Jeromy-Yu Chan
Coordinator-in-Chief, Wikimania 2013