Several community initiatives are underway to catalyze an active Wikisource strategic vision, including a Wikidata Books task force, the start of a Wikisource User Group, and four Google Summer of Code projects offering improvements to the Wikisource workflow.
The Wikipedia Adventure, an onboarding game designed to teach new editors how to successfully contribute to Wikipedia, has grown from script to storyboard, to interactive prototype, to an on-wiki design. A first version of the completed 7-level game on English Wikipedia will begin alpha testing at Wikimania in Hong Kong this month.
Students participating in the WikiArS program at schools in Catalonia and other regions of Spain have published more than 70 graphics and animations, ranging from portraits of historical figures to geology infographics and scientific illustrations. These images are used on Wikimedia Commons, Wikipedia, Wikibooks, and Wikispecies.
Replay Edits, a gadget to visually display the edit history of an article over time, is in development with a code repository on GitHub. The project will also begin demoing the prototype at Wikimania this month.
The first version of the MediaWiki data browser, Miga, has been released. This open-source software allows non-technical users to easily display structured data, like that found in Wikidata or in Wikipedia infoboxes.

We’ve seen several common themes emerging in what we’re learning from Individual Engagement Grantees so far.
Connecting people and ideas is a critical component for many projects, and grantees recognize that community engagement and active collaboration is key for a project’s success. WikiArs grantee David Gómez is seeing value from a 3-partner model he’s piloting to connect art teachers, subject-matter advisors (historians, geologists, etc) and Wikimedians in order to supervise students creating images. He reports that it “provides an enriching experience for the students and guarantees the subject-specific quality of their contributions.” David also recognizes the value of wider community feedback on students’ work, and has found some good results from posting updates in local project Village Pumps: “expertise + community = quality improvement.”
Wikisource grantees Micru and Aubrey report that recognizing that they “needed an international, involved community” has been important for their project. They’re “trying to facilitate the self-organization of existing participants on a broader scale,” by focusing on connecting Wikisourcers together across language projects, and building ties with other Wikimedia communities and initiatives like Wikidata and Wikimedia’s participation in GSoC.
To create the Wikipedia Adventure, Ocaasi has been connecting the dots between gamification research, the MediaWiki Guided Tours extension, and the needs of new editors just learning about Wikipedia. He reports that input from testers, consultants, experts and non-experts alike have been useful for moving things forward and that iterating on feedback has been key to his process. “The group of talented people that has helped or consulted on this project has made it far better than it would have been if approached alone.”

What has been challenging

These attempts to connect across different languages and communities also bring unique challenges to each project. Micru and Aubrey note that “Wikisource communities are scattered and do not communicate with each other,” and so sometimes all they can do is “keep generating opportunities.” They’ve also found that “there isn’t a real communication channel for ‘cross-project thinking.’ It is very difficult to involve different communities for discussion that would involve different projects (like Wikipedia, Wikisource, Wikiquote).” They hope that as more cross-wiki projects emerge, more solutions will come as well.
Translation remains both an opportunity and a challenge for WikiArS, where a primary goal is translating Catalan materials that have proven to work well so that they can be reused internationally. The MediaWiki Translate extension facilitates this, but also brings some challenges when the source language of documentation is not English. 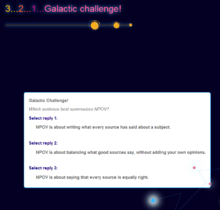 For his Replay Edits project, Jeph Paul reports on the complexities of connecting information to users from the servers: “The biggest challenge and the most crucial part was showing the html of a page from its wikitext on the browser. It has to be done this way to ensure the user gets to see the changes quickly, without burdening Wikipedia’s server with very expensive requests.”
As for MediaWiki data browsing, Yaron Koren reports that retrieving data from various Wikimedia projects also brings complexity. “For Wikipedia, there is simply no end to the variations that can occur within infoboxes, that all ideally need to be handled in order to standardize the data. For Wikidata, the flexibility of the data structure means that it can be difficult to simply get a single value, given a combination of page name and field.”
Pragmatism has helped many of the grantees meet challenges as they arise. As Micru and Aubrey put it, “We tried to alternate theory and practice.” This is important because, they say, “you can set up a six month strategy that can become useless after a few months. For example, the advent of Lua and Wikidata are changing the rules as we speak. So we sorted out our priorities as they came, and especially as partners and interlocutors followed up…we adopted a bazaar approach, instead of a cathedral one.” Ocaasi noted the importance of being both practical and theoretical in his approach as well: “It was invaluable to ground the work of this project in respected literature on the topic of games, new forms of narrative fiction and motivation. Pairing this theoretical background with hands-on interviews with new editors helped ground the game in practical knowledge.”

Grantees say that the experience of participating in the Individual Engagement Grant program has facilitated their progress in some unexpected ways. Jeph said that “Being officially part of a project has made it easier for me to interact with a lot of Wikipedia users.” According to Aubrey and Micru, the evaluation and recognition of their project has been even more useful than the funding. “You are not a single, rogue Wikisource user who is speaking for himself only. Monetary resources are of course important, but not as much as the fact that your thoughts and projects now have a shape, they have a well-defined goal and this has been recognized.”
Ocaasi found that discussion with grants staff has been useful along the way and the process of reporting back on the grant at regular intervals “helps frame the structure of what would otherwise be a somewhat nebulous six-month process.” For Yaron, having monthly check-ins “to see the software from the perspective of someone from outside the Semantic MediaWiki milieu” has also been helpful. Reflecting on the funding that frees him up to work on his project, David said, “Being an IEGrantee has given me peace of mind about devoting a significant portion of my time to wikiArS….However, I do feel a sense of urgency: I want to get as much as possible out of this opportunity.”

Opportunities are now available for a new round of projects! Do you have an idea for a project that will improve a Wikimedia community or website? Share it in our newly revamped IdeaLab or submit an Individual Engagement Grant proposal by September 30th. We look forward to welcoming a new set of grantees to the program by the end of the year.
Siko Bouterse, Head of Individual Engagement Grants, Wikimedia Foundation