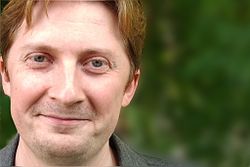 Stanislav Kozlovskiy, a neuroscientist and lecturer at Lomonosov Moscow State University, discovered Wikipedia for the first time in 2003. At the time he wrote about neuroscience, mathematics, history, psycholinguistics and genetics in his popular blog. He quickly became interested in Wikipedia and began editing articles there. Soon he found out that Wikipedia existed not only in English but in other languages as well, including Russian.

“In the English Wikipedia there were maybe over 100,000 articles at that point,” he said. “In Russian, there were about several hundred articles and, to be honest, they could hardly be called articles at all. So I gave up my blog and started writing articles for Russian Wikipedia.”

Kozlovskiy said that Wikipedia was not really well-known in Russia and there were not many users in it at that time. One of the first steps he took was to write the very first article in Russia about Wikipedia, which appeared in a popular computer journal Computerra. After the publication of this article, he sad, the number of active users in Wikipedia increased almost twofold.

Today, Kozlovskiy is the Executive Director of Wikimedia Russia, the official chapter in the country. The organization raises money, arranges conferences for Wikipedians and negotiates with copyright holders of photo archives to get them to publish those archives under a free license. Kozlovskiy was able to convince one of the biggest news agencies in Russia, RIA Novosti, to release a part of their photo archive as CC-BY. Those photos are currently used in Wikipedia articles in multiple languages.

Kozlovskiy also works to reform Russian copyright laws to make them more liberal. He participates in working groups and round tables about intellectual property legislation in the State Duma, the Ministry of Communications and the Ministry of Culture, among others. He said he tries to eliminate unnecessary restrictions, which harm Russian Wikipedia’s development.

Kozlovskiy met with former Russian President Dmitry Medvedev, who was not previously familiar with the concepts of copyleft and free license. “He did not know that there are problems with using such licenses in Russia and that the use of works is restricted in many ways, for example, there is no ‘freedom of panorama,’ said Kozlovskiy, who explained to the president the importance of solving these issues for Wikimedia projects such as Wikipedia.

Elaborating on freedom of panorama laws, which are absent in Russia, Kozlovskiy said, “If you want to publish a photo of a building and that building is the sole purpose of your photograph, according to the existing laws, you have to get a written permission from the architect, otherwise you’re breaking the law.”

Medvedev understood the significance of the raised issues and after that meeting told the ministers to revise the civil code in order to solve the problem with free licenses in Russia. Kozlovskiy said that the text of civil code amendments is now ready and has been passed to the State Duma. These amendments will be revised by the parliament in the fall of 2013.

“But since Medvedev left the office,” Kozlovskiy said, “state authorities’ attitude towards easing the copyright laws has changed rather dramatically, along with the views upon freedom of the Internet. For example, the deputies recently passed the laws about websites blacklists and so-called ‘anti-pirate law.'”

Despite these setbacks, Kozlovskiy is hopeful the civil code amendments he and Wikimedia Russia have supported will be accepted.

“We hope that we will be able to change the world and make it more free,” he said.