43.4 million bytes. That’s how much content students from the Wikipedia Education Program in the United States and Canada have contributed to the English Wikipedia in the three years of the program’s existence.
What does 43.4 million bytes look like? It’s approximately 29,000 printed pages, 58 reams of paper, 9.6 million words — or the equivalent of 17 full copies of War and Peace. 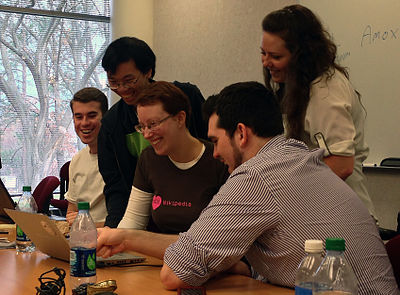 The Wikipedia Education Program started as a small pilot in fall 2010, with about 200 students who contributed content to Wikipedia in place of a traditional research or term paper in one of their university classes. Professors found students were more engaged with the Wikipedia assignment, and students found they worked harder, learned great research and writing skills, and were proud to show off Wikipedia articles they’d written to family and friends. Volunteer Wikipedia Ambassadors helped students learn the basics of how to edit Wikipedia.
In three years, the program has grown dramatically. Now, more than 1,200 students in the U.S. and Canada participate in the program each term. Classroom-based activities are taking off globally, with efforts led by Wikimedia chapters, individual professors, and dedicated volunteers underway in more than 50 countries worldwide.
The U.S. and Canada programs are still going strong, with more than 70 courses incorporating Wikipedia contributions as part of the coursework in the spring 2013 term. Even more professors are expected to use Wikipedia assignments in the fall 2013 term.
The potential for future development is high; dedicated volunteers from the U.S. and Canada program have recently created a new nonprofit, called the Wiki Education Foundation, which will work to coordinate, improve, and increase Wikipedia’s use as a teaching tool in higher education. The volunteers running this organization care deeply about both the qualitative impact on Wikipedia as well as the learning experience student editors have during their assignments.
Student work from the Wikipedia Education Program in the United States and Canada is having a major impact on the English Wikipedia. Research shows the students are adding high-quality content. Some students’ articles get hundreds of thousands of page views, and the sheer amount of knowledge students have added to Wikipedia articles over the last three years is astonishing. After all, 17 War and Peace’s worth is a lot of knowledge.
LiAnna Davis
Wikipedia Education Program Communications Manager