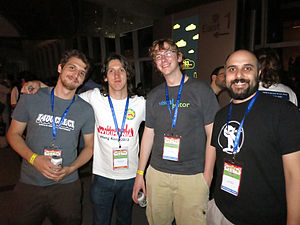 With the grant period for the Wikisource strategic vision process reaching its conclusion, we would like to make two major announcements. We’re happy to introduce the open survey for Wikisource contributors and supporters (translated by volunteer community members into 11 languages). The survey is a great way for the community to voice its opinion regarding Wikisource and its future. We  hope you will spend 10 minutes filling it out. It’s worth it.
The second announcement is that Aubrey and Micru, will continue our volunteering efforts to kick-start the Wikisource User Group for one more month. Except for the final name (pending approval from the Wikimedia Foundation legal team), all necessary steps have been taken to assure that all Wikisourcerors can use this association to find and shape development priorities, and as a way to have international coordination.
We attended Wikimania and Google Summer of Code projects. The Wikimania days were as hectic as they were productive. Aubrey participated in the Open Access panel, and presented Wikisource as a positive tool for the scientific community, provided that Wikisource users possess a desire to support digital-born documents. Micru participated in several discussions about how Wikidata can support bibliographic information and how it can all come together with external organizations.
With regards to the Google Summer of Code projects, you can read the final reports from the grantees that worked hard during the summer months on projects that can be used for Wikisource: