(Lodewijk Gelauff is a member of the Wikimedia Affiliations Committee and Nicole Ebber is staff member of Wikimedia Deutschland. This blog post expands on their presentation at Wikimania 2013 in Hong Kong.)
At Wikimania in Hong Kong, we presented a selection of the coolest Wikimedia projects organized around the world. We aimed to inspire people on the kinds of cool projects you can organize at any chapter. We hoped to pass on a bit of that inspiration.
So how do you give people an inspirational overview of the coolness of our movement? We decided that the concept that Lodewijk used in 2011 and 2012 (Wikimania in Haifa and Washington DC) still worked: Present a large number of cool projects in a relatively short amount of time. Of course this means you can’t go into depth and explain the projects thoroughly, but it does allow you to exhibit a wide range of opportunities.
We asked all the Wikimedia affiliate organizations around the world what they thought their three coolest projects were. Being well rooted in the international community of Wikimedia Chapters, we took the opportunity to also reach out to thematic organizations and user groups. We ended up collecting 80 amazing projects, 40 of which we presented.
Preparing this presentation took several months. Ultimately we had more material than we could present. Compared to 2011 and 2012, the projects were significantly more diverse. Instead of simply copying the same formula over and over again, it was impressive to see how new initiatives were developed to create a creative array of new projects. We picked selections based on the following criteria:

In Hong Kong, we took the stage right after the opening ceremony and provided the audience with a printed list of the projects. In order to give the audience a chance to participate, we decided to play a game. We selected the five top projects and asked the audience to applaud enthusiastically for the project they felt inspired them most. These were the five projects. 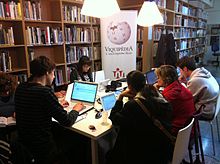 In collaboration with the Catalan Ministry of Culture, Amical Wikimedia kicked-off the GLAM project BibliotequesCAT with a network of libraries. They based the partnership on the principle that Wikipedia and libraries are the virtual and real-world doors to knowledge, and that they should work together in such a way that provides new levels of access. Each library can decide how it wants to collaborate, ranging from Edit-a-thons and Wikipedians in Residence, to photo and text liberation. The institutions can pick à-la-carte what they think works best for them in their specific area and join the long-term relationships with Amical Wikimedia. (more information)

Möbius, a tour through Wikipedia on the radio

Wikimedia Mexico has been hosting a weekly radio show called Möebius in conjunction with the local campus radio station Ibero 90.9. It connects two seemingly unrelated topics using Wikipedia articles. Who hasn’t experienced getting lost on Wikipedia, spending hours surfing from one article to the next? How does one go from Isaac Asimov to Radiohead? The moderators play with this concept. (more information)

Wikimedia Isreal was able to collaborate with pilots of the General Aviation Association and allowed Wikimedia photographers to fly along for photo-ops! Wouldn’t every photographer love to do aerial photography? There were only a few requirements to participate: Follow a (fully sponsored) course of aerial photography to capture the best pictures possible, make no requests for detours etc (tough for Wikimedians!) and of course don’t get airsick. Over the period of a year, 5 people had the opportunity to take 1,500 photos in the Viki Avir project. (more information) 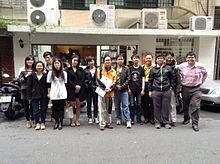 The writing bootcamps for new Wikipedians are monthly meetings organized by Wikimedia Taiwan. They serve as an opportunity for Wikipedians to train new editors. 99 different people attended over the last two years. Hosting a bootcamp doesn’t require many resources and is an excellent method of outreach. (more information)
The applause-o-meter gave us a clear result: Most people found the idea of taking aerial photos of Israel enormously inspiring and voted for Viki Avir as the winner. This  not only earned Wikimedia Israel good wishes from all around the world, but also some coverage in Israeli press.
The full presentation is available as a prezi. You can find the video here (starting 1:33:00). Want more inspiration? We have compiled a long list of 65 projects, including contact data and links to keep the conversation going.
Lodewijk Gelauff (member of the Affiliations Committee)
Nicole Ebber (staff member of Wikimedia Deutschland)