In 2004, Antonio Santiago, aka Tony the Marine, began editing Wikipedia by expanding upon the work that his son started on the free encyclopedia. Since then, he has become a passionate researcher, broadening and polishing articles about Puerto Rican military history. Six years after his initial edit, then Puerto Rican Secretary of State Kenneth D. McClintock called Santiago the Commonwealth’s foremost military historian.
Santiago, a Vietnam veteran, father of three, and loving husband of 40 years, said his contributions are a direct product of his background. Born in the South Bronx to Puerto Rican immigrants, he credited his perspective on history to his experience growing up Latino in the United States. In 1969 he was accepted into Columbia University, but chose to join the Marines, where he served until 1975. Though he grew up in New York City, Santiago said his abiding interest is in his parent’s homeland of Puerto Rico. His time in the military made him revaluate the role of Latinos in the United States, which, in turn, led him to view American politics towards Puerto Rico differently.

Santiago’s contributions to Wikipedia center on Puerto Rico’s military forces, something that prior to his involvement he said had very patchy coverage. “I have written over 500 articles on Wikipedia because of the principles that Wikipedia was founded on,” he says. “To be able to share my knowledge with thousands of people for free is beyond my comprehension. Only Wikipedia can make that possible.”
Santiago’s Wikipedia debut was a bit unconventional, considering that he began editing before he had really spent much time reading it. “I didn’t start by using it as a resource. I wanted to fix and add to the articles which my son had written,” he said. “When I saw the possibilities that Wikipedia presented, I started writing more articles.” 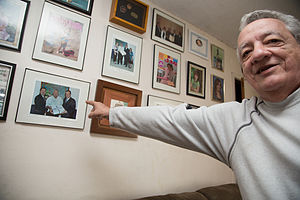 Santiago says he has met a number of high-profile people because of his work on Wikipedia.

Santiago wants to “make people aware of the good things that Latinos have done,” he said. “We’re living in an era, especially in the United States, where the anti-Latino sentiment is very high.”
“Most people do not know the contribution that Latinos have made. Wikipedia has provided me with the tools to help,” he added.
Santiago’s work has not gone unnoticed. He often catches the eye of Puerto Rican journalists and state officials. “I wrote an article once about Medal of Honor recipients who had died and the families got together because of that,” he said. “It came out in the newspapers. It made the headlines. That makes me proud of my work, and it makes me proud to know it’s making a difference.”
Santiago underscored Wikipedia’s impact on future generations as motivation for contributing. “As a father and a grandfather, I can appreciate that for the first time in history there’s somewhere providing children around the world with the tools of knowledge, allowing them the opportunity to use what they have learned to make this a better world.”
But don’t expect him to want too much credit for the value he’s added to the encyclopedia. “It’s not about me. It’s about Wikipedia and the opportunities it provides and the impact it has allowed me to make on people. I write for the love of it, you know, and for the love of my people. It’s an opportunity to educate people.”
Profile by Joe Sutherland, Wikimedia Foundation Communications volunteer
Interview by Victor Grigas, Wikimedia Foundation Visual Storyteller.