Access to Knowledge Programme at the Centre for Internet & Society (CIS-A2K) organized the first ever Train the Trainer Program in India. 20 Wikimedians from 8 different language communities and 10 different cities across India attended CIS-A2K’s Train the Trainer (TTT). The residency program was spread over four days. The event was represented by Wikimedia communities including Bengali, Gujarati, Sanskrit, Malayalam, Hindi, Marathi, Telugu and Odia. The event was organized to help build capacity amongst Wikimedia volunteers to conduct effective and efficient outreach programs in their respective regions in an effort to expand the Wikimedia movement to reach the nooks and crannies of a large nation like India. CIS-A2K realizes that with a small team of five it cannot cover all communities. This program would create leadership, which in turn will hopefully take the movement forward.

Hari Prasad Nadig, one of TTT’s resource persons said, “I think the training program was in the right direction. In fact, I thought it was a very good idea.”

Hari Prasad Nadig, one of TTT’s resource persons and sysop on both Kannada and Sanskrit Wikipedia, said, “I think the training program was in the right direction. In fact I thought it was a very good idea. It falls in-line with what is needed to be done with utmost importance for the Indian Wikipedia community – creating more trainers/mentors who can bring in editors to Wikipedia or guide the existing ones.”

CIS-A2K conducted a post-event survey to evaluate TTT program and also review individual training and development activities organized during the four-day workshop. The main aim of the survey was to understand how the attendees perceived the event and help CIS-A2K plan a more successful and well-attended event in the future.
Including a variety of questions ranging from likert scale questions, drag and drop list, paragraph text, multiple choices, provided an interactive and systematic way to gather participant’s feedback. The survey questions were also designed to cover different aspects of the event including attendee’s opinions of the sessions,  as well as what they learned. Results and findings will be used to refine and improve the next TTT program.

“The overall experience of TTT program was quite uniquely satisfactory.” said Rangilo Gujarati.

Participants gave an above average rating of 8.25 on a scale of 10. We believe this high number indicates that CIS-A2K’s was able to inspire more volunteers to conduct online and offline outreach activities to grow their Wikimedia communities.

“It was a good experience for me. The sessions were extremely useful and informative”, said Pranayraj1985

CIS-A2K wanted to expose participants to various topics. Sessions or organized on topics ranging from crowdsourcing to DIY digitization to media wiki to presenting with impact to building virtual communities and more. CIS-A2K wanted to make sure that each and every participant took away something from the sessions.

Presenting with Impact I & II was the most liked session according to feedback. DIY digitization led by Malayalam Wikipedian Vishwa Prabha and Odia Wikipedian Subhashish Panagrahi also received a high ranking. This was followed by Copyright CC and Wikimedia led by Achal Prabhala.
Sessions such as Spectogram, Accessing Media Wiki Data, Wikimedia India Chapter – History & Present were found to be less useful. This could be due to the fact that some of the participants already had sufficient knowledge about the topic or were simply not interested in the topic.

All participants unanimously suggested that CIS-A2K continue this program in the future and offered suggestions to improve it next time: 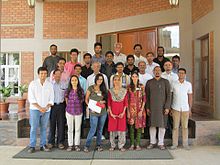 A group photo on the last day