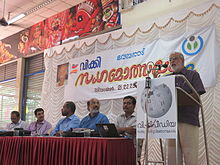 Mr. Sashi Kumar‘s speech during the inaugural session of WikiSangamotsavam-2013

WikiSangamotsavam, the annual conference of Malayalam Wikimedians, took place in Alappuzha, Kerala, India from December 21-23, 2013. The conference, supported by the Wikimedia Foundation Grants program, Wikimedia India Chapter and CIS-A2K program brought together around 200 Wikimedians and well-wishers from all over India.
The host town, Alappuzha, is popularly known as the Venice of the East due to its picturesque backwaters and canals. Alappuzha was chosen as the location for the conference in an effort to bring attention to the regions diversity and touristic appeal to Wikimedians, and thereby increasing the towns representation on Wikipedia. The Board meeting of the Wikimedia India Chapter took place in conjunction with the event. A range of pre-conference events, including a bicycle rally, a meetup for young Wikimedians and several edit-a-thons took place prior to the event.

The first day of WikiSangamotsavam started with Wiki-Vidyarthi-Sangamam, a meetup of student Wikimedians. The digitization of ‘Sri-Mahabharatham,’ a seven volume Malayalam epic was flagged off during the Wiki-Vidyarthi-Sangamam. Around 100 students from all over Kerala got to interact with each other and learn about Wikimedia projects in Malayalam. There was a Wikipedia workshop for impaired delegates. They were introduced to various means of accessibility by the DAISY Consortium. This session helped them learn about self-educating tools and accessing knowledge platforms like Wikipedia and contributing in Malayalam online.
There was a panel discussion on ‘Malayalam and Wikipedia’ during which language and computing experts discussed the role of Wikipedia in the growth of Malayalam language. Talks and presentations about topics relevant to Wikimedia were held in three parallel sessions.
The first day of the event also marked Malayalam Wikipedia’s 11th birthday. The special occasion was celebrated by cutting a birthday cake. At the end of the day, Wikimedians entertained themselves by singing folk songs of Kerala.

The second day started with the inaugural session. The event was inaugurated by Mr. Sashi Kumar, a media analyst and founder of India’s first regional satellite television.
Dr. Thomas Isaac, former minister of Kerala, was the chief guest of the function. Mementos were awarded to the active Wikimedians who organized various Wikimedia events throughout 2013.
The QRpedia project was launched by Dr. Thomas Isaac, former minister of Kerala state at the Alappuzha lighthouse, one of the oldest monuments in Alappuzha. The QRpedia project aims at making QR codes for tourist locations in Alappuzha which link to Wikipedia articles pertaining to specific locations and monuments. By next year, all historical monuments and tourist destinations will be QR coded. If successfully completed, Alappuzha would be the first town in India to be fully digitized by QR codes.
There was a Non-Malayalam Indic Wikimedia meetup for Wikimedians who contribute to English and Indic language Wikimedia projects other than Malayalam. There was a track to discuss how various collaborative projects could be built to have content creation drives for enriching Wikipedia.
Day 3

Wikimedians on a boat during WikiJalayathra

The third and final day of WikiSangamotsavam was devoted to taking Wikimedians on a trip amid the flora of the Vembanad lake to experience its unique biodiversity. Experienced Wikimedians who have done extensive research on the regions biodiversity provided a narrated tour onboard the boat. The 126 acres of reclaimed wetland around the lake and its rare plant species serves as the location for a rich discussion and collaboration among bio-enthusiasts on Wikipedia. Wikimedians also discussed how to go about protecting the biodiversity of the R.Block of Vembanad lake.
The three-day long WikiSangamotsavam brought many of the Malayalam Wikimedians under one roof and enabled them to share their best practices, ideas and visions for the future. The photographs from the event can be viewed on Wikimedia Commons here.
– Netha Hussain and Subhashish Panigrahi