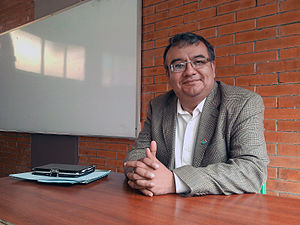 Ecatepec de Morelos is a city and municipality of Greater Mexico City, about one hour from downtown Mexico City. It is the most populated municipality in the State of Mexico and ranks second in most population in the country. Instructor Jorge Luis Esquivel Zubiri from the Universidad de Ecatepec invited his law students to edit the Spanish Wikipedia and Wikisource about Mexican legal concepts and laws. But since the second term of 2013, after learning about the Wikipedia Education Program of Wikimedia México, the teacher and the students decided to give more structure to their local organization and work in Wikimedia projects grouped under the name of Club WikiUNE.

Since August 2013, the students edited articles on Wikipedia about legal concepts such as absence and custody agreement. In Wikisource, they upload some Mexican law, such as the Commercial Establishments Act or the Industrial Property Law. Teacher Jorge Luis notes that this work serves to give greater publicity to the Mexican legal provisions, and he wants to increase the quality and depth on the origin and development of laws that govern more than 100 million Mexicans. 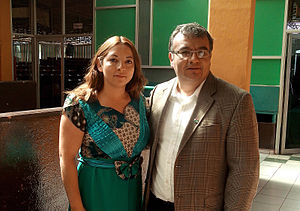 “It’s a form of open government and for the students a way to develop their professional skills to contribute to a noble project,” says Esquivel Zubiri, also a teacher at the Facultad de Estudios Superiores campus Aragón (School of Higher Studies Aragón) of the National Autonomous University of Mexico (UNAM), where he will soon establish another Wikipedia Student Club.

On February 15, the students of the Club WikiUNE invited the board of Wikimedia Mexico to a report of work held in the auditorium of the university, in which the directors of the school, the teacher Jorge Luis and Guadalupe Garcia, president of the club, gave details to Ivan Martinez and Carmen Alcázar from Wikimedia Mexico about the work. They also requested support of the Mexican chapter to continue working on the Wikimedia projects at the University of Ecatepec. It was very rewarding to arrive at school with the logos of Wikimedia and Wikipedia on the front door and hallways of the schools, plus students printed shirts, flyers, and even bottled water with the logo of WikiUNE.

For Wikimedia Mexico, it is very valuable to start a joint work in the metropolitan area of Mexico City, and expand the Wikimedia mission to more educational institutions in the country.