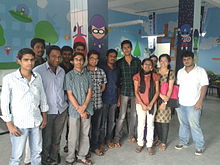 Participants of the second half of the workshop

Jeph Paul and I (Netha Hussain) conducted a workshop on Wikimedia projects for students at Startup Village, a non-profit business incubator based in Kochi, Kerala, India. The workshop event page can be viewed here.
It was scheduled from 11:00 am to 3:00 pm on January 18th. We were told that the participants would mostly be undergraduate students of engineering. So, we planned on talking about the Mediawiki API in the second half of the session. Sandboxes with wikipedia articles were created to demonstrate the editing of the articles. The sandboxes were used by the participants to get familiar with the wiki markup. Prior to the event, a post was created on Startup Village’s blog to introduce the participants to editing.
The event started half an hour later than planned, as most of the participants took longer to make it to the venue. We had slow internet connectivity which affected the pace of the workshop. We found it difficult to demonstrate the examples. The biggest challenge was not a technical one, but connecting with the audience. The content was tailored for an audience with a background in programming. However, the audience turned out to be diverse and largely non technical. Most of the participants did not have a mobile device, so the hands-on session was not as fruitful as was we wanted it to be. We ended up lecturing more and demonstrating less. The workshop was divided into two halves. The first half was an introduction to Wikipedia and the wiki markup. The second half was about using the Mediawiki API with javascript. After the first half, half of the audience left. Though the participants were asked to sign up on the event page, only a few of them did so. Their contact details could not be gathered, making it difficult to track their contributions. We were not prepared to introduce the participants to the opt-in forms of Wikimetrics, the tool used to quantitatively assess the impact of outreach events. So, evaluation was out of the question.

On the brighter side, there were many interesting and engaging queries from few of the participants who had already edited articles on Wikipedia. It was nice to discover that some of the participants wanted to connect with the local Wikimedia community. Some of the participants and the organizers wrote to thank us for conducting the workshop. The event was a success in that it introduced the audience to various ways of getting involved with the Wikimedia movement, thereby changing the perception that the only way to get involved is by writing articles online.
One of the best lessons we learned from the event was that it is very important to know the audience well in advance and to structure the workshop accordingly. The participants seemed to prefer the visual editor over editing the wiki markup.
The workshop was a good learning experience for us. Shortcomings were identified, which is the first step to constructing a better program. Startup Village has invited us to conduct similar workshops in future.
Netha Hussain, Wikimedian
Jeph Paul Alapat, Wikimedian