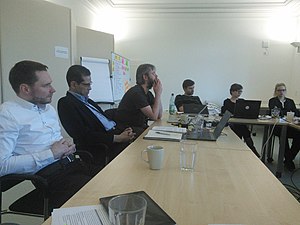 A session  from   FDC site visit  to WMDE.

I had the first opportunity to learn about Wikimedia chapters when I participated in the Wikimedia conference in 2011, representing the newly formed Wikimedia India chapter. While  presentations and interactions were useful, the visit to Wikimedia Deutschland (WMDE)  chapter office was very helpful, as I had the chance to meet the staff and learn about the chapter’s various activities. After that, as a member  of the Funds Dissemination Committee (FDC) from 2012, I had the opportunity to learn even more about chapters. Though the initial FDC framework and process was the result of extensive deliberations of FDC Advisory  group supported  by consultants from Bridgespan, some of the gaps became apparent after the first round of FDC deliberations. My major concern was that the process/framework  did not account for the diverse attributes of chapters and relied on impersonal wiki pages for discussions, even when substantive funds are at stake.
When the opportunity to visit WMDE came up, I signed up immediately, as it  gave me the opportunity to meet with the chapter’s leadership and stakeholders in person  – allowing me to better understand their plans and the challenges they face. I, Mike Peel, another FDC Member along with WMF staff team of Anasuya, Garfield and Frank visited WMDE during  Feb 5-7,  2014 in Berlin.
In this report, I would like to highlight my impressions on the chapter programs and their evolution as well as share thoughts on WMDE chapter performance and areas for improvement.
Chapter Structure and Infrastructure 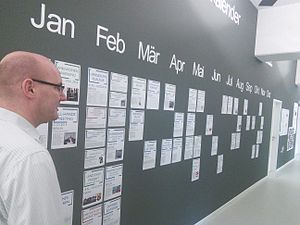 Pavel informed us that the chapter had recently moved into their new facility. He  took us for  a tour of the facility, highlighting the thought process behind the design which allows flexible use of space and also meets the requirements of various stakeholders. The chapter has about 64 full time and part time staff (equivalent to 45 FTE). They are organized into four program teams and one operational/admin team. Each team has appropriate workspaces and computing infrastructure. There was a good number of small meeting rooms and a large conference room. The facility also includes an event room which can accommodate up to 99 participants. The room is used at least two days a week for various chapter programs and its partners. A large calendar on the event room wall has  the details of programs that have been planned till the end of the year, leaving no doubt about the effective use of infrastructure. The event room is designed in such a way that part of it can be used as workspace if required by putting up partitions.

Chapter Programs
Chapter priorities  are Community support,  Institutional engagement, Political and legal advocacy and Software development. Community support is provided through various schemes such as literature request, library support, support for events, small meetups and also the large annual event Wikicon. The support is mostly reactive. The chapter had also been successful in liaising with the community, through the efforts of a community coordinator, who is hired from within the community. Thanks to such initiatives, introduction of new technology features in German wikipedia have become smooth. The politics and legal team is spearheading its efforts to be a key contributor to changes to EU member state copyright laws, which in many cases inhibit free sharing of photographs and GLAM resources. The international support  team is helping the movement  by supporting events such as Wikimedia conference,  Diversity Conference and Chapters Dialogue. In the open educational resources spaces, WMDE contributed to developing Wikipedia teaching material  working with a local partner Klicksafe. This was adopted by few state education departments.  The results are  expected to be available by the end of year. 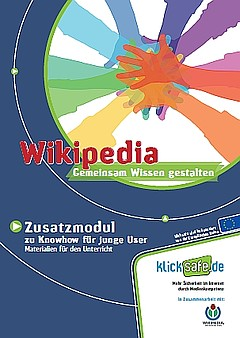 Theory of Change Model
All the initiatives are based on a well thought out change model called Theory of Change. This theory gives importance to short, medium and long term objectives and their linkages. Indicators are identified for each outcome. Manuel,  the head of evaluation explained that this approach is expected to improve the focus on impact and  outcomes rather than outputs.
Free form discussions
Apart from two days of structured sessions, we had a day of free discussions based on the FDC teams interest in digging into specific areas of interest. I was able to utilize that day to gain better insight into community/ Chapter member relationships, Chapter recognition program, the change model and the priorities for Wikidata. Pavel explained that the long term plan for the chapter is to develop four pillars of funding, with two pillars focused on programs of immediate benefit to Wikimedia projects and the other two pillars focused on long term benefits to the free knowledge movement.
Community and Board interaction
The community meetup and dinner with WMDE board members was another interesting  event where I was able to address questions on the FDC process. I gained better insight into WMDE community and its focus areas and their feedback on the FDC process. I  encouraged them to utilize the opportunity of FDC process session at the Wikimedia conference 2014 so that their input can be helpful for the FDC  process review, due in 3-4 months.
Wrapup
We had a wrap up session with WMDE team, where we exchanged  feedback from the visit. Though three days of visitation could be a disruption to everyday operations, I  was happy to know that WMDE found it useful. I thanked WMDE for its various initiatives and support for the movement – for being an inspiration for several budding chapters. I appreciated their efforts in managing the Wikimania panel discussion on future of Wikipedia  and wanted such initiatives to be continued. I encouraged the WMDE team  to increase their involvement further in shaping the movement. On the evaluation front, I shared the expectation that the programs be explored in such a way so that the results are available at quarterly intervals  so that the change models can be evaluated and improved rapidly. Pavel expressed his happiness about the outcomes of the visit and suggested that the presence of FDC volunteer members had made a  big difference.
I would like to thank the WMDE  Board, Executive Director Pavel and his staff, as well as the community. I also want to thank my FDC colleagues and WMF staff who took an active part in deliberations. Overall I found the site visit  very useful in understanding the WMDE priorities, plans and  challenges.