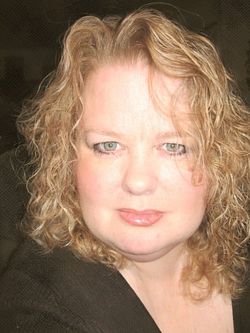 Cynthia Ashley-Nelson passed away Friday, April 11th. She was attending the Wikimedia Conference in Berlin as an AffCom member, and on Thursday had participated on her first annual AffCom meeting. The news about her death has surprised and shocked the people at the conference. I realize there are many people who might not be familiar with her, so I wanted to write a few words about the impact she made on those who knew her.
In my role as Board liaison to the Affiliations Committee, I had seen Cindy, as her friends called her, apply to become a member – and ultimately elected to the committee. She had such a solid background, so relevant to the work AffCom does, she was such a strong candidate, it was a no brainer for AffCom to elect her. They were not disappointed. Cindy was participative, incredibly engaged from day one, always looking ahead and trying to improve existing processes and expand AffCom’s role. She had wonderful ideas and a refreshing perspective regarding movement roles and the role of AffCom. One that I especially liked was her desire to implement a thorough Affiliate Development Program, to help guide new affiliates and teach them relevant skills so they could not only be better equipped to survive, but to thrive and have a bigger impact in a shorter period of time.
I got to know Cindy a bit beyond that, for she wanted to test ideas and potential directions in which to take the movement. We would send each other long emails about movement roles and how to move forward with the movement. And as it usually happens, conversations turned from the more formal to the informal, eventually including little snippets of our every day lives, the good things that happened to us and the not so good. When we met for the first time face to face several days ago, we gave each other a big hug. In the session we had during the AffCom meeting she once again showed her passion and commitment to help re-imagine the role of AffCom and how to help new affiliates. At the end of that session, she was confirmed as the new vice-chair of AffCom. That speaks to the impact she made on the committee in such a short time. I think our last interaction was about getting together at some moment during the conference to just hang out and talk. She had a great smile.
As far as we know, Cindy died peacefully and in her sleep. When the tragic news came in on Friday night during dinner, so out of the blue, I was shocked. Literally shocked. She had missed the meeting between AffCom and the Board, which was very surprising, and it hadn’t been possible to contact her, but it didn’t necessarily make one think something bad had occurred. When the Board was notified of what had happened, we wanted to be very respectful of the fact that the priority had to be to contact the next of kin before any kind of public announcement was released. But AffCom had to be told. I had been an AffCom member before joining the Board. Breaking the news to them was one of the hardest things I’ve ever done. We went to a room to deal with the shock and the reactions. Nobody wanted to be alone.
This morning after the next of kin had been located and notified, we all got together for breakfast and went together to the venue where a grief counsellor was available. There was a brief but touching tribute at the beginning of the conference. AffCom then prepared a public statement about Cindy’s death. I felt my place was with them, helping them word it. As the schedule was reorganized, I missed the Meet the Board session which was moved to the morning, which I deeply regret, but I did want to be with AffCom in these moments. I want people to know I will be available for anyone who wants to ask me anything about the Board or the movement at the venue. I just couldn’t make it that morning. Before ending this post, I would like to take a moment to thank the people of WMDE, who were incredible in such difficult circumstances and who set up a special room to grieve for her and write in a book of condolences, particularly Pavel, and WMF staff, especially Anasuya, Garfield and Asaf. The support of Board members was deeply appreciated as well, not only by me but by AffCom as well.
This post is perhaps a bit cathartic for me. Cindy, you made an impact in those who knew you and you will be remembered. My thoughts are with the family and friends. Rest in peace.
María Sefidari, WMF Board of Trustees member