Around legal circles, the Wikimedia Foundation is often seen as a curiosity. With a fraction of the staff of other top ten websites, the Foundation arguably does more with less. The core of this complex apparatus consists of two indispensable parts − a strong volunteer community and an equally dedicated legal staff. 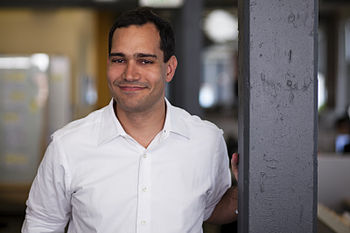 As deputy general counsel, Luis Villa is at the forefront of this eclectic mix that combines traditional legal counsel with community advocacy that stretches across 700+ communities. With a year under his belt at the Wikimedia Foundation, he feels that he’s doing what he always wanted to do. “Out of law school I told someone at my summer job that I wanted to be an Internet lawyer,” says Villa. “He basically said there’s no such thing, but now I have that job!”
Luis’ interest in law and technology go as far back as high school, recalling the United States vs. Microsoft court proceedings as a moment that ignited a curiosity in him for politics and technology. Embracing his passions, he pursued a degree in Political Science and Computer Science at Duke University. “When I started studying computer science and political science in 1996, those were two separate things,” Villa explains. “I was interested in political philosophy and I was interested in computers and I didn’t really think the two had much overlap.” It wasn’t until he read Lawrence Lessig’s “Code and other Laws of Cyberspace” that he realized how much overlap there was between the two.
His first job was in quality assurance for Ximian, scoping out bugs and figuring out why things were crashing. While at Ximain he worked extensively on the GNOME open source project doing quality assurance − eventually becoming a board member. He went on to work at the Berkman Center for Internet and Society as a “geek in residence” at Harvard. After a comprehensive search into a variety of institutions with a strong intellectual law faculty, he enrolled at Columbia Law School, graduating in 2009. Before working at a law firm, he spent a year at Mozilla, leading the project to revise the Mozilla Public License. Luis later joined Greenberg Traurig, participating heavily in the Google Oracle lawsuit. While at Greenberg he became an outside counsel for the Wikimedia Foundation. With a background well tailored to the Foundation’s goals and needs, Luis eventually made the decision to join the Foundation full-time as deputy general counsel.

Luis quickly found himself doing much of what he was already used to − but with the twist he was looking for. The foundation’s legal department largely focuses on taking the right amount of time to consult with the widest possible community of editors and users, as well as developing plain language policies that equally benefit and support the Foundation and volunteers. “For the most part the work I was doing in past companies was similar to what I do at the Wikimedia Foundation, but what stands out the most is the diversity of problems we see at WMF,” says Villa. “Open source in the Mozilla community is easily quantifiable. You can talk about the Mozilla community, or the GNOME community easily, but the Wikimedia community is easily 700 to 800 communities. That took a while for me to get my head around.”
This constant interaction with the community is truly the core of the foundation. Policies are built in an open space where anyone can share ideas. The idea is to develop policies that protect the Foundation, and protect editors and readers. Arguably, the Foundation does more than pretty much any other major web property to protect user privacy.
Despite the staff’s strong background and undeniable dedication, Luis makes it clear that it is the fundamental principles of the community that truly keeps the Foundation running. “Every member of this team has a strong background and are quite simply really sharp lawyers, but that’s just step one. Step zero is the community − the community is so dedicated at getting this stuff right, that we only get the most complex and hardest questions.”
The community acts like a sort of filter, explains Luis − essentially picking and choosing the problems that merit further attention. “I don’t think there’s anyone in the community who thinks of themselves as a person who fights libel, but by simply saying ‘citation needed,’ that person is essentially helping our legal team by making biographies of living persons fact based, for example.”
The Foundation’s international community provides a broad and interesting spectrum of responsibilities. When asked what shocked him the most when he first started working at WMF, Luis answered, “The breadth of issues that we face as a legal team. We handle cutting edge free speech issues, copyright issues, complex privacy issues, product counsel for the technology teams, it’s really all over the place.”
The reality is that most outlets don’t perceive lawyers to practice the same values of the Foundation. The view is inverted. They see lawyers as closed off professionals who do something mystical. “At WMF you get to be a real internet lawyer dealing with hard legal problems − and you also get to sleep at night,” explains Luis. This seems to be at the core of what motivates him and others like him. As an example, he mentions last year’s case involving a French editor and the French government, where Wikimedia’s legal team helped defend the editor, as a situation where “we stood up for the right values” and protected both the volunteer and the Foundation.
The future of the Foundation is bright, says Luis. “The Foundation is building the capacity to do more interesting things − for a while it was more about how to keep the site running, and now it’s more about how to be proactive.” The Foundation continues to supply the community with the right tools to flourish in a safe way. Whether it’s privacy and trademark policy or first amendment rights, Luis finds himself exactly where he wants to be. “This is the first time in many years where I am not at all worried about what I’m going to do next — I’m so in the moment.”
Carlos Monterrey, Communications Associate for the Wikimedia Foundation