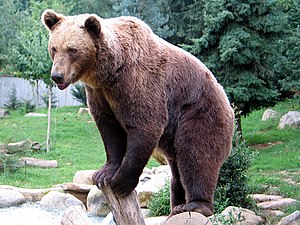 The article on the brown bear won the fourth writing contest.

The article on Direct Democracy in Germany is the best article written on the German Wikipedia for the month of March, 2014. After a long and heated discussion, the jury of the German writing contest (“Schreibwettbewerb“) chose it above the article about historian Percy Ernst Schramm and the article about Block 11, a building in the Auschwitz concentration camp.
Twice a year, the eyes of the community turn to this competition. Writers can choose their own topic: Past winners have tackled varying subjects, including the brown bear, Carolingian illuminated manuscripts and the French football club Stade de Reims.
The writing contest is a microcosm of Wikipedia: It’s not just about good articles and encyclopedic writing – stories, social dynamics and the fundamental principles of Wikipedia content matter, too.

Ten years of triumphs and tears, articles and opinions

The “Schreibwettbewerb” was modeled on the Dutch Wikipedia’s “schrijfwedstrijd.” On September 5, 2004, user Achim Raschka created the first page on the German Wikipedia that launched a writing contest. Forty-four articles were submitted for this first writing competition. The five-person jury chose user Lienhard Schulz’s article on the Lehnin Abbey as the winner.
The writing context struck a chord within the community and attracted considerable interest. In some years, more than 120 articles competed for the prize and after the contest many of them were rated as “featured” or “good,” placing them among the 0.3% best articles on the German Wikipedia. In the months after the end of the writing contest, far more Wikipedia articles than usual were awarded “featured” or “good” status.
The winners have never been chosen by the community of people active on Wikipedia; instead, a jury of Wikipedians makes the selections each year. The fifth writing contest, held in 2006, was the first occasion in which jury members met in person. Paying the jury’s travel costs for this meeting was one of the first direct community funding tasks undertaken by Wikimedia Deutschland, which was then still a young organization.

The article on the viral envelope won the seventh writing contest and the audience award.

The list of winners in 2004 was headed by an article on a typical local history topic – the entry on the Lehnin Abbey focused on a monastery near Berlin. Winning articles in subsequent years covered a wide range of subjects.
Some articles, such as the  one on the viral envelope and on L-gulonolactone oxidase, dealt with scientific subjects. Others, such as the article about the Nazino affair, were about history, while the article on Carolingian illuminated manuscripts was an example of an entry on art; and the one on Nosferatu was about a film. Sometimes the winning article is on an unusual subject – such as the piece on the théâtrophone, an early twentieth-century device that enabled subscribers to listen to opera and theatre performances over the telephone.
Medical experts, in particular, have tackled the writing contest with gusto. An astonishing number of articles about human and animal diseases have reached the top three; viruses, bacteria and ailments of all sorts. Also common in the top rankings are articles on topics such as line-drawing algorithms and entries on various Olympic Games, diverse aspects of history, art history and individual animal species.

Long and heated arguments ensue. Jury discussions in May 2014.

Right from the start, Wikipedians were attracted and motivated by the writing contest to such an extent that more industrious Wikipedians quickly used it as a platform for their own ends: One member of the community used the second contest, held in 2005, to incorporate an elegant fabrication and an edited picture into an article. The fraud was discovered and triggered extensive discussion on quality assurance and fact-checking.
The selection of prizewinners has not always proceeded smoothly. In 2006, a winning article that dealt with the modern philosophical approach known as methodical culturalism was particularly controversial. Even within the jury there was heated debate about whether the article was a profound entry exploring current trends in contemporary philosophy in depth or a convoluted text about an unimportant marginal phenomenon. The issue was so contentious that a few days after the results were announced an outvoted jury member submitted a request for deletion for the winning article. So much uproar was caused among Wikipedians that in that same year they created an audience award, the main purpose of which was to select a different winning article. Although subsequent jury decisions have usually met with more agreement, the audience award still exists. So far just one article – the one on the viral envelope – has managed to win in both categories. Since 2010, there has also been a third prize: an award for the community member who has provided the most help to other entrants during the writing competition.

One of the principles of the writing contest is that it is emphatically “just for fun.” There have always been prizes for the winning articles, but they are small tokens. The prizes certainly bear no relation to the time and effort that writers put in to win them.
Shortly before the contest, the volunteer Wikipedians elect jurors from among their numbers. Jurors work in one of four categories – exact sciences, culture, social sciences, or history. Once the jury has been selected, authors have a month to nominate articles in one of the sections. The article must have been posted on Wikipedia in the month of the contest, or significantly expanded during that time. For the purposes of the competition, the only thing that counts is the difference between the first and last days of the contest. At the end of the month the juries meet online to decide on a list of winners in each section and on a list of overall winners. The overall list, in particular, often gives rise to heated debate because it may literally be a case of having to compare linoleum with hip-hop records and decide on a winner.
The prizes are usually donated by other community members and are almost as diverse as the community itself. Past prizes have included tickets to the opera with a post-performance talk and drinks, wild game shot by the donor, Bulgarian egg-carrying bags, bicycle tours of Hamburg’s harbor, hand-knotted Wikipedia bookmarks, and, of course, less unusual items such as books, local specialties, vouchers and so on. As with other activities carried out by volunteers, the prizes are always unpredictable, often creative, and frequently surprising. A preliminary impact evaluation report published recently by the Wikimedia Foundation, which examined eight on-wiki writing contests including the Schreibwettbewerb, remarked that the fact that it “encourages existing community members to donate prizes … apparently increases the fun factor for the community as a whole.”

The next ten years

To date, the number of Wikipedia articles that have been nominated for the writing contest is in four figures, and several hundred have been good enough to be ranked after just one month. The largest writing contest so far was in 2006, when 128 different articles competed. In later years, the number has been somewhat smaller, giving rise to talk of the decline of the writing contest and discussion of possible changes to its format. But little has changed as a result, and the contest continues to function as before. Like Wikipedia itself, the writing contest keeps on going. It is perhaps a little more tranquil than it used to be, with somewhat less drama than ten years ago, but it is a continual, enduring and rigorous event and just as much fun for everyone involved as it was in 2004. We look forward to the next ten years!
Dirk Franke, Wikimedia Deutschland