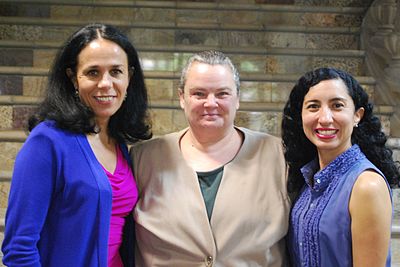 Tec de Monterrey has officially adopted Wiki Learning throughout the school system, working with Wikimedia projects as part of its continuing effort to develop a 21st century pedagogy for the institution.
Tec de Monterrey is Mexico’s largest private university system, with 34 campuses throughout Mexico. In 2013, this system, based in Monterrey, Mexico, launched an ambitious program called the Tec 21 Educational Model (Modelo Educativo Tec 21) to redesign teaching and learning methods for all of its programs, from high school to the graduate level. Recognizing that students learn differently in the digital age and that graduates need skills beyond mastery of the subject matter to succeed, the program is part of an effort to encourage and strengthen in students 21st century skills and to improve the universities’s standing among other institutions in Mexico, Latin America and the world.
The earliest assignments with Wikipedia at Tec de Monterrey were in 2007 with advanced English students at the Toluca campus. These assignments were continued at the Mexico City Campus in 2010 and have since developed to include various levels of English, as well as classes in journalism, communication and Spanish for foreigners. The Mexico City Campus’s initiative to have students translate Wikipedia articles (from the language students are studying — English — into their native language: Spanish) came to the attention of the Wikipedia Education Program, which later adopted the model in Egyptian universities in 2012. Since then, translation assignments have become relatively common in schools that use Wikipedia.
Tec students organized Mexico’s first Wikipedia student group, today under the name of Wiki Borregos. Other innovations include assignments involving the uploading of images, creation of sound files and illustrations, using photo descriptions to impart language and cultural knowledge, and Wikipedia work to satisfy community service requirements for both International Baccalaureate and undergraduate students.
Wikipedia was chosen because it allows professors and students to create projects that satisfy one or more of the Model’s goals such as leadership, global citizenship, social consciousness, oral and written ability in Spanish and English. It also promotes international/multicultural perspective, innovative thinking, critical thinking and problem solving. It meets another important concept, that of extending learning beyond the classroom and campus.
Integration of Wikipedia into the Model is being done through a “leaders” program called the TEC 21 Leaders Project (Proyecto Líderes TEC 21), which aims to incubate innovative ideas with the goal of applying them throughout the system. This effort, which is named Wiki Learning, is being led by Mexico City campus library director Dr. Lourdes Epstein (User:Lourdes Epstein), communication and new media professor Dr. Paola Ricaurte (User Paolaricaute) and English professor and longtime Wikipedian Leigh Thelmadatter (User:Thelmadatter). The first task is to execute training workshops and classes for professors and other staff, starting in the Mexico City area in June, then expand into other parts of Mexico. The aim is to not only focus on article creation but to also take advantage of other skills that our students are developing, such as digital animation, computer programming, sound recording, foreign language ability (especially English, French and German) and outreach efforts with cultural institutions.
Administratively, Wiki Learning efforts will be based in campus libraries, starting with the library at the Mexico City Campus, to take advantage of their access to information, expertise in management of information and the centrality to all campus departments and programs.
For more information, please contact Leigh Thelmadatter (Regional Ambassador for Mexico, Education Cooperative member) at leigh@itesm.mx
Leigh Thelmadatter, Wiki-Borregos, ITESM Campus Mexico City
Dr. Lourdes Epstein, Library Director, ITESM Campus Mexico City
Dr. Paola Ricaurte, Professor, ITESM Campus Mexico City