A logo for Wikipedia in the Ganda language.

Our names are Paulina Bäckström and Caroline Gunnarsson. We are two 20-year-olds from Sweden. Our journey began in 2012, after our first trip to Uganda during high school. As part of an exam we were asked to write Wikipedia articles based on our experiences from the trip. Wikipedia’s unique value as a source of knowledge and educational tool inspired us to embark on a project. To read more about the background of our project, please go to our page at Uganda pilot.
Our project is called “Luganda Wikipedia.” We all know what Wikipedia is, but what’s Luganda? Luganda is Uganda’s second largest language, with about seven million native speakers and ten million second-language speakers. Around 16 million Ganda (people living in the Buganda region), speak Luganda.
However, Luganda is often considered a neglected language. Why? I do not have an answer for that. But when you talk about Luganda being neglected on Wikipedia, I have a bit more insight. In January, the Luganda Wikipedia page contained only 166 articles (!). A deserted Wikipedia indeed. It was disheartening to see so many speakers and readers of the language but so few articles, we wanted to make a change. Wikipedia must be one of the best ways to share knowledge in the modern world. Imagine how much knowledge people in Buganda (and other parts of Uganda) can share with each other, with only access to a computer and internet. The mission for the two of us, was to teach Ugandans how to write in Wikipedia, start a local Wikipedia community and plant a seed for the future of  Wikipedia in Uganda. You can summarize the project like this, as noted on our pilot page: “The purpose is to expand Luganda Wikipedia with articles on sustainable development and open up a world where knowledge is freely accessible to everybody in Uganda.” Beautiful words in theory, but did it work in practice? Let me just say that the number of articles in Luganda have risen from 166 to 198. We have inaugurated Uganda’s first (and perhaps Africa’s first) Wikipedia center (computer center) in a small village called Mbazzi, where villagers, who are almost all farmers, are contributing their knowledge. We have also started “Wiki clubs” at different schools.

Free knowledge is spreading in the country and our vision is taking shape. But why sustainable development? The question should rather be, why not sustainable development? The subject crosses most, not to say all, areas of politics, economics and biology. Furthermore, we in the industrialized countries not only have an opportunity but a responsibility to influence LDCs in a positive, sustainable way. Personally, I’m happy to be part of a project that is at the forefront of modern technological aid. I would like to use a quote from one of the great modern leaders our world, Nelson Mandela; “education is the most powerful weapon you can use to change the world.”

map of the languages in Lake Victoria’s area.

I feel proud to be part of all this, and to share Wikipedia in Africa. I’m happy of the fact that many of the target groups of the project were youths and students, in other words, the future. There are two things that really struck a chord with me during my experience:
1. The trust we got from Wikimedia Sweden to carry out the project was incredible. We are young and not very experienced, but they never doubted our skills. Instead of being dismissive, they took trust in our enthusiasm. If we had tried to implement this same idea with the U.N. or most other big humanitarian organizations, our guess is that they would have ignored us.
2. To watch a farmer/student/teacher, who had never touched a computer let alone written a Wikipedia article before, create an account and write his or hers first words on an article was an amazing experience. To see how something we in more industrialized countries take for granted, e.g. Internet and computer savviness, was an eye-opening experience, one that made me realize the importance of exchanging knowledge. The passion to share information, to learn computer skills and support Luganda made me high. High on teaching. High on Wikipedia. High on life. But also high on the fact that this was like a punch to other parts of world, who still see Africa as a starving, “behind” continent. 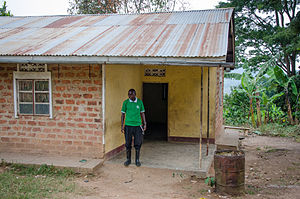 Last but not least I would like to provide an update on how the project has progressed since our departure in February. The story comes from project manager Paul Kiguba who on April 22nd wrote this in an e-mail:
“Greetings from Mbazzi! I am writing this mail from Mbazzi Wikipedia Centre. It is wonderful here. The solar is very strong. We have been arguing about how many kilos of feed a mature pig eats. And I remembered I had posted an article in the Luganda Wikipedia about the feeding of pigs. Immediately, I logged in. Wow… there I was…. All knowledge was there… I printed it out in Luganda… distributed two copies to the caretakers. How wonderful!!! Wikipedia, the source of knowledge!!! As we talked, another villager asked me if I knew the right portions of ingredients in feeds of pigs. And lo, there was Wikipedia again! I downloaded another article from the Luganda Wikipedia about mixing pig feeds,contributed by me. Yes, the project is taking shape. Today, Orange reconnected us. Orange has asked for the formal proposal, as we look forward to a Memorandum of Understanding in future.”
Yes, that’s one small step for man, one giant leap for Uganda!
Paulina Bäckström, Wikimedian
Caroline Gunnarsson, Wikimedian