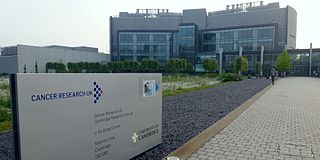 The Cambridge Research Institute, one of CRUK’s main research centres.

This post was written by John Byrne, Wikimedian in Residence at both Cancer Research UK and the Royal Society and was first published on the Wikimedia UK blog.
I’m fortunate to have been appointed as Wikipedian in Residence at Cancer Research UK (CRUK), the world’s largest cancer research charity, funding over 4,000 research staff working on cancer. The role will run until mid-December 2014 and is funded by Wellcome Trust, a large UK medical research charitable foundation. I’ll be based at CRUK’s London headquarters, the Angel Building in Islington, working there four days a week. Alongside this, until early July I will also be continuing my six month term, on a one day a week basis, in the same role at the Royal Society, the UK’s National Academy of Science.
Part of the role at CRUK will be to work with the existing medical editors on the English Wikipedia to improve our articles on cancer topics, in particular those on the four common cancers which are widely recognised as having the greatest “unmet need” due to little improvement in survival rates in recent decades. These are cancers of the lung, pancreas, brain and oesophagus. CRUK has just announced a new research strategy with an increased focus on these types of cancers, and my role will complement that. I will also be addressing other cancer-related content, for example in relation to the Medical Translation Project of WikiProject Medicine.
CRUK has access, through its own staff and its access to other researchers and clinicians, to tremendous amounts of expertise, both in terms of science and the communication of science, where they have teams trained and experienced in communicating with a wide range of distinct audiences, from those who write their patient information pages in very plain English to the different teams who produce material for scientists and for general audiences. My boss, Henry Scowcroft, writes for CRUK’s award-winning science blog, and is a Wikipedian. I’ll be exploring a number of approaches in hopes of bringing all this expertise to bear on Wikipedia’s content.
Wikimania 2014 in London, about a mile from CRUK’s HQ, is a great opportunity to bring CRUK and many medical Wikipedians together face to face. A novel aspect of the role is that we are planning to conduct research into the experiences on a range of different types of consumers of Wikipedia’s cancer content. There has been very little formal qualitative research into the experiences of Wikipedia’s readers – we hope this project will begin to address this gap, as well as encourage others to carry out similar projects.
I will also be making presentations and conducting training for key groups of CRUK staff and researchers at their five main research centers in London, Manchester, Glasgow, Oxford and Cambridge. Some of this will be traditional how-to-edit training, but I will also be doing some workshops aimed at people who want to contribute reviews and comments, but who don’t expect to do much editing themselves.
On another tack, I will be working on releasing suitable CRUK images on open licenses and uploading them onto Wikimedia Commons. I think the medical diagrams CRUK has created will be especially useful in Wikipedia articles. We’re already making substantial progress towards a substantial release of content.

Meanwhile, in another part of town…
At the Royal Society the programme of public events continues with an editathon on Neuroscience on June 7th, bringing scientists and experienced Wikipedians together to improve articles, with the emphasis on key topics in the field. I will be conducting further training within the Royal Society community, for the Research Fellows, who are early or mid-career research scientists whose work is funded by the Royal Society.
Over the last month I’ve been able to announce that the Royal Society has agreed to release the photos it takes of each new Fellow on their election and upload them to Commons. The photos of this year’s 50 Fellows will be taken at the formal induction day in July. Other image releases are being discussed and I’m hopeful that an agreement will be met before my period at the Royal Society ends.
The Royal Society has also offered Wikipedians one year subscriptions to its range of scientific journals, via the Wikipedia Library. It is hoped that this offer will continue in the future with other publishers.
I’m also working on other ideas for things that can continue after my term ends in July. The Royal Society is keen on continue working with the Wikimedia movement, so I expect to be able to leave a solid legacy when my formal term ends.

Dame Sally Davies FRS, elected in 2014, already with an article

Women Fellows of the Royal Society
The 2014 elections of fellows took place on April 30, and 50 new Fellows, plus 10 foreign members, were elected. User:Duncan.Hull was as usual wonderfully quick in creating a List of Fellows of the Royal Society elected in 2014, which as usual showed that most did not have Wikipedia biographies! Currently only 15 of the 50 have articles on the English Wikipedia, with one (Professor Demetri Terzopoulos FRS) having one on the French WP. Of the Foreign Members, 9/10 have articles, with Professor Jean-Marie Tarascon (who doesn’t even have one on French WP) the only exception. As far as gender goes, there are 7/50 and 1/10 women, who initially had 2/7 (now 4/7) and 1/10 articles. So the overall percentage with biographies is 15/50= 30% , with the women at 2/7= 28.5%. For the 10 Foreign Members we have 90% and 100%.
I see this as reinforcing my suspicions regarding the often-heard idea that Wikipedia coverage of women scientists is currently poor compared to that of male scientists. This is no coincidence, as there has been considerable effort over recent years to improve coverage, with several events at the Royal Society and many more across the world, and it has paid off. I continue to see Wikipedia as part of the solution here, rather than part of the problem (to use a favourite figure of speech of that famous woman scientist and FRS, Margaret Thatcher).
Until this new batch of Fellows, 100% of all the female FRSs (past and present) had articles, many very short of course, and I can forecast with some confidence that the three that are still without articles will have one by the next Ada Lovelace Day in October or International Women’s Day in March, as these dates see a particular concentration of Wikipedia events on Women in Science.
This includes Julian Lewis (biologist), just created very recently after the early death of this cancer researcher and author. As it happens he was the former director of one of CRUK’s research institutes, the London Research Institute as well as being an FRS.
Two of the women in the 2014 intake already have had new articles started, with Dorothy Bishop (psychologist) now at a good lenght, though Karalyn Patterson remains a one-liner. So then there were three …. to be precise Amanda Fisher, Jenny Nelson and Sheena Radford (and of course, plenty of men). Let’s hope the arrival of photos on Commons after the July ceremony helps turn the remaining red links blue.
You can contact John directly about both of these projects on his Wikipedia user page. For the Cancer Research UK project go here, and for the Royal Society project go here.