The Women Scientists Workshop Development IEG [1] is a project aimed at empowering women college students by encouraging them to create content about women scientists on English Wikipedia.
We worked tirelessly through the cold Chicago winter, motivated by the desire to address Wikipedia’s gender gap. We held a series of seven workshops in addition to three that were held the previous semester. We’ve since gained valuable insight as we move into the next phase of developing a best-practice kit for countering systemic bias in institutions.
Many important principles were discerned from the workshops we held in our first semester. We spent weeks categorizing this information into a trial kit for other institutions to use. Of the 23 individuals who attended the first semester workshops, two were male and 21 (91%) were female. Five (22%) came to more than one workshop. 30 different articles were created or significantly improved. Interestingly, only one participant found out about the workshop through flyers placed in high-traffic areas throughout the school. The rest of the attendants found out through word of mouth (friends, Facebook, email etc). This was not what we expected. One of the workshops was not promoted on social media channels and consequently experienced a low attendance rate because of it. 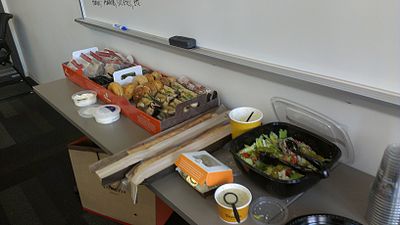 Food is a huge motivator for college students!

Several common threads were apparent when students were asked questions regarding the motivation behind their attendance. The most common factors are food, social environment and social justice. These motivations held steady through the second semester workshops. We believe that there are several different elements that help encourage new editors, especially women, to join and work on systemic bias issues. Incentives like free food from popular local restaurants and unique merchandise from the Wikimedia Foundation were a big draw for students, but many women were also motivated by the fun and friendly social environment and the opportunity to learn something interesting. We have found that advertisements that emphasize all of these factors are the most effective, especially when distributed via popular social media channels and direct email to participants who have already signed up.
We have finalized the kit and will be working with a student graphic designer to make the kit more visually appealing. We are also setting up alpha tests – if you are interested in participating, please contact me at keilanawiki@gmail.com. The mid point report for this project provided detailed metrics on this pilot phase of the program. Metrics from alpha testers will be made public as soon as we have them. In our workshops, more than 70 articles were created or expanded and there was a core group of women that returned to the workshops each week and forged strong friendships that have continued beyond the workshops.

If you are interested in running your own program, check out the Systemic Bias Workshop Kit located at en:Wikipedia:Systemic bias kit or email me at keilanawiki