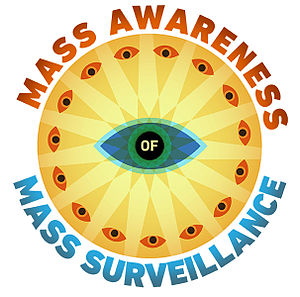 Graphic designed for the Snowden anniversary.

On June 5, 2013, the Guardian confirmed that the US National Security Agency collected communication records of millions of individuals — indiscriminately and regardless of whether they were the subject of an investigation. The story revealed the first of a series of government documents leaked by Edward Snowden. Today, one year later, individuals and organizations all over the world will speak out against mass government surveillance.
Last month, the Wikimedia Foundation reaffirmed its opposition to mass surveillance by signing the Necessary and Proportionate Principles on the application of human rights to surveillance. In that spirit, we would like to inform the Wikimedia community about the global actions taking place this week. Here are some of the events around the anniversary of the Snowden revelations.

United Kingdom: A coalition of digital rights organizations will organize a Don’t Spy On Us campaign against mass surveillance by the UK’s intelligence services. They will hold a public event on June 7th, featuring speakers such as Jimmy Wales, Bruce Schneier, Cory Doctorow, Alan Rusbridger, Shami Chakribarti and Stephen Fry. Additionally, Simon Davies will release an analysis of the global impact of the Snowden revelations based on contributions from NGOs, academics and legal professionals.
Spain: The Association for Progressive Communications will hold a TakeBackTheNet! conference. There, human rights activists and technology providers will discuss strategies to give people control over their own data when using the internet.
Poland: This year, Poland is celebrating 25 years since their overthrow of communism. Many politicians, including President Obama, will visit the country. Fundacja Panoptykon will take this opportunity to highlight the importance of freedom of speech and the right to privacy in a country that has been subject to ubiquitous surveillance before overthrowing an oppressive regime. The campaign will encourage people to post pictures of themselves while holding a sign that reads “Surveillance is not freedom. Say it on the 4th of June” and tag the pictures with the hashtags #ObamaPL and #25latwolnosci. Fundacja Panoptykon will also hold an event with a wide range of activities, such as workshops on how to encrypt emails and how to create a “safe wallet” that prevents attacks on cards with RFID chips.
Germany: Digitale Gesellschaft is organizing a rally in front of the Chancellery on June 6th to demand the government stop extending the surveillance powers of the Bundesnachrichtendienst and address mass surveillance issues by various intelligence agencies.

Netherlands: Bits of Freedom will release a blog post analyzing the impact of the Snowden revelations. The Internet Society Netherlands will hold an event titled “One Year After Snowden” on June 5th in the Royal Library in The Hague.
Ukraine: June 6th is known as “journalist’s day” in Ukraine. For the last three years, activists have gathered in front of President Yanukovych’s residence Mezhirya to protest media censorship. This year, the event will focus on free speech, investigative journalism, digital security and activism. Earlier this year, Mezhyhirya was opened to the public following the end of the Yanukovych government. That led to a discovery of more than 200 folders of documents detailing the former president’s activities. On June 6th, various journalists and activists will present a final analysis of the documents as well as a new documentary about YanukovychLeaks.

Colombia: The Special Rapporteur for Freedom of Expression will release a report on “Freedom of Expression and the Internet” on June 16, 2014. Fundación Karisma will hold an online event that will bring together journalists and security experts to discuss the report. Special guests will include Fernando Bermejo, Katitza Rodriguez and Carolina Rossini.
Chile: ONG Derechos Digitales will launch a new legal assistance service on digital rights issues. It will also issue a good practices guide for exercising fundamental rights online.

United States: Fight for the Future initiated the Reset the Net campaign. EFF as well as dozens of other organizations, including reddit, Thunderclap, Access, Restore the Fourth, the Center for Democracy and Technology, and the Free Software Foundation have joined in to support a day of action to “Reset the Net.” A number of advocacy organizations released blog posts with information about things we now know about NSA surveillance that we did not know a year ago.
Canada: The Protect Our Privacy Coalition will campaign for effective legal measures to protect Canadian residents from secret government surveillance. The coalition will encourage the use of encryption to fight mass surveillance. They will also try to get Canadian Members of Parliament to take a stand against secret surveillance online.
Mexico: With the support from La Quadrature du Net, Mexican activists have started a campaign called #DefenderInternet (Defending Internet). They oppose President Enrique Peña Nieto‘s telecommunications bill, which could turn the Internet into an instrument of surveillance.
These are only some of the actions taking place around the world today. If you know of additional events or have anything else to add, feel free to leave a comment below.
Yana Welinder, Legal Counsel
Roshni Patel, Privacy Fellow