The Libre Graphics Meeting (LGM) started in 2006 as an annual event aimed at bringing together graphic developers of free software for design, desktop publishing, photo editing, 3D modeling and animation. Last year the workshop took place in Madrid, hosted by MediaLab-Prado. This year it happened in Leipzig from April 2-5. Our purpose in hosting the meeting in Leipzig was to connect the local community around free graphics with the Wikimedia movement and the creative graphics community around Wikimedia Commons. This academic year the wikiArS initiative was launched in Madrid to involve the schools of art and design with the objectives of promoting Wikimedia and free knowledge. A collaboration between Wikimedia Spain and Gráfica Liebre studio have begun to hold workshops where attendees produce graphics using free software, then uploaded the graphics onto Commons. The wikiArS initiative has been developed over the last three years with seven schools in Catalonia who participated with Amical Wikimedia and with the participation of the University of Cadiz in collaboration with Wikimedia Spain. We went to Leipzig to present on our experiences and offer it as a model for other countries to emulate.

The presence of wikimedians in LGM was low, even though Wikipedia is cited by participants (for example Free culture aware educators in art and design) as a reference model in terms of effective collaboration and governance. The overlap of principles regarding free culture makes us think that in the coming years we should strive for even greater collaboration between the two communities. After our workshop, some participants expressed interest in starting a similar meetup in their respective fields, so we may soon see the start of wikiArS in other parts of the world. As is the case in many art schools, students work on assignments to produce graphic images and ultimately count on the advice of an expert. This process can take weeks or months. For our two-hour workshops, the participants should be able to work independently without expert advice. Taking that into account, it’s useful to select images that the Commons community has already established a model for. In the LGM workshop we proposed vectoring coats of arms of cities close to Leipzig, typographical diagrams of free fonts and maps of urban parks in Leipzig. Most participants chose the first two options and mainly used Inkscape to create vector images, then uploaded them to Commons using the version of UploadWizard adapted to wikiArS. Something that was also noteworthy was the contribution of one participant, Brent Yorgey, who used the Haskell language to generate SVG graphics, later publishing the code in a Commons subpage for anyone who wants to create variations of it. Previously, Brent had presented on the Diagrams library package for Haskell. 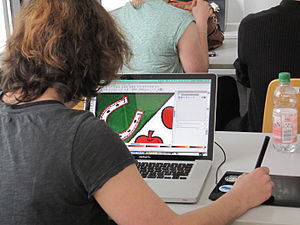 In essence, LGM was a chance for us to learn more about free graphic projects and the people who developed them. The more experienced graphic creation software developers gave updates and outlined their future plans. We were able to learn about libre graphics projects regarding education, documentation and other issues; not strictly related with the development of graphic tools, such as the “Commons Machinery” project that develops resources and generates proposals to preserve the metadata of published works on the Internet and maintains context information associated with the artworks. It was interesting to participate in a session that linked and strengthened the network of educators committed to free culture that had begun in the previous year’s edition of LGM in Madrid. Also discussed were issues relating to hesitancy from teachers, students and educational institutions in adopting free graphics software along with more optimistic cases in which this hesitancy has started to fade away. The network has a web page, mailing list and will develop other forms of coordination, in addition to the idea of ​​developing modular curricula that may be useful as a model for teachers.

The coat of arms of Thummlitzwalde.

In general, the free graphics community is enthusiastic about taking advantage of the capabilities of the tools being developed. There is an interesting component when experimenting with new tools and new features along with technical rigorousness to resolve bugs and complex issues. Its diversity and activity contrasts with the concentration in the area of proprietary software, in which Adobe is becoming the only actor. We discovered a widely shared interest in typography. Several lectures and workshops dealt with the development of typefaces, using Fontforge, or about projects that exploit the potential of the OpenType format. Being together in Leipzig with the Gráfica Liebre team was a great opportunity to get to know each other and share ideas on wikiArS, as well as strategies to better connect the creation of graphics and the free software community. We got to know a nice East German city and were able to visit the Museum of Applied Arts showing a path from antiquity to the present day through the Stilj Jugend, the Art Deco and Bauhaus. The experience in LGM was a success in terms of spreading the wikiArS initiative, getting in touch with the libre graphics community and testing the overall functionality of the workshop, giving us an image of the areas which we hope to improve upon and develop in the coming years.
David Gómez (Member, Wikimedia Spain and Amical Wikimedia)
Rubén Ojeda (Member, Wikimedia Spain)
Ruben and David’s participation in the Libre Graphics Meeting was backed by a participation support grant from the Wikimedia Foundation.