Since July 2013 Dimitar Dimitrov is Wikimedian in Brussels. In assorted blogposts he talks about his experiences vis-à-vis the EU. 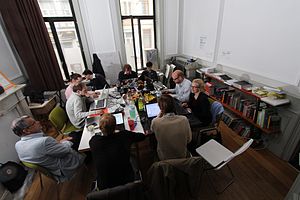 It’s five to three. A dapper man, slightly out of breath, enters the room and quickly makes his way to the front. The event started almost an hour ago, but despite double-bookings in his schedule, Marco Giorello – deputy head of unit “Copyright” at the European Commission – didn’t want to miss the debate on Mass Digitisation and Access to Cultural Heritage co-organized by Wikimedia and the Flemish Commission for UNESCO. He shakes a few hands on his way to the speaker’s table and immediately finds himself in the midst of a lively discussion about the future of European copyright.
The room full of Wikimedians, representatives of cultural institutions and international associations witnessed in-depth arguments around copyright and the internet. Besides Marco Giorello, there were speakers from the British Library, the Federation of European Publishers, DG CONNECT of the European Commission, the Flemish Centre for Expertise in Digital Heritage “PACKED” and Wikimedia. The challenge to represent our movement was hereby accepted and mastered by Jean-Frédéric Berthelot of Wikimédia France.

Apart from digitization projects, the debate also turned to practical and legal issues. It was User:Hubertl from Wikimedia Austria who managed to not only hand out WLM calendars and chocolade to the speakers during the event, but also used the opportunity to bring up Freedom of Panorama in the EU and more specifically, its lacking harmonisation. Various conversations continued well after the official discussion had finished. Representatives from the European Commission Directorate-Generals for the Internal Market (DG MARKT) and Communications Networks, Content & Technology (DG CONNECT) seized the opportunity to exchange views regarding Wikimedia photographs, “Commonists” and other chapter folk. They took away a number of concrete examples illustrating the absurdity of current copyright legislation across the 28 member states and a lot of ideas on how to remedy the framework. 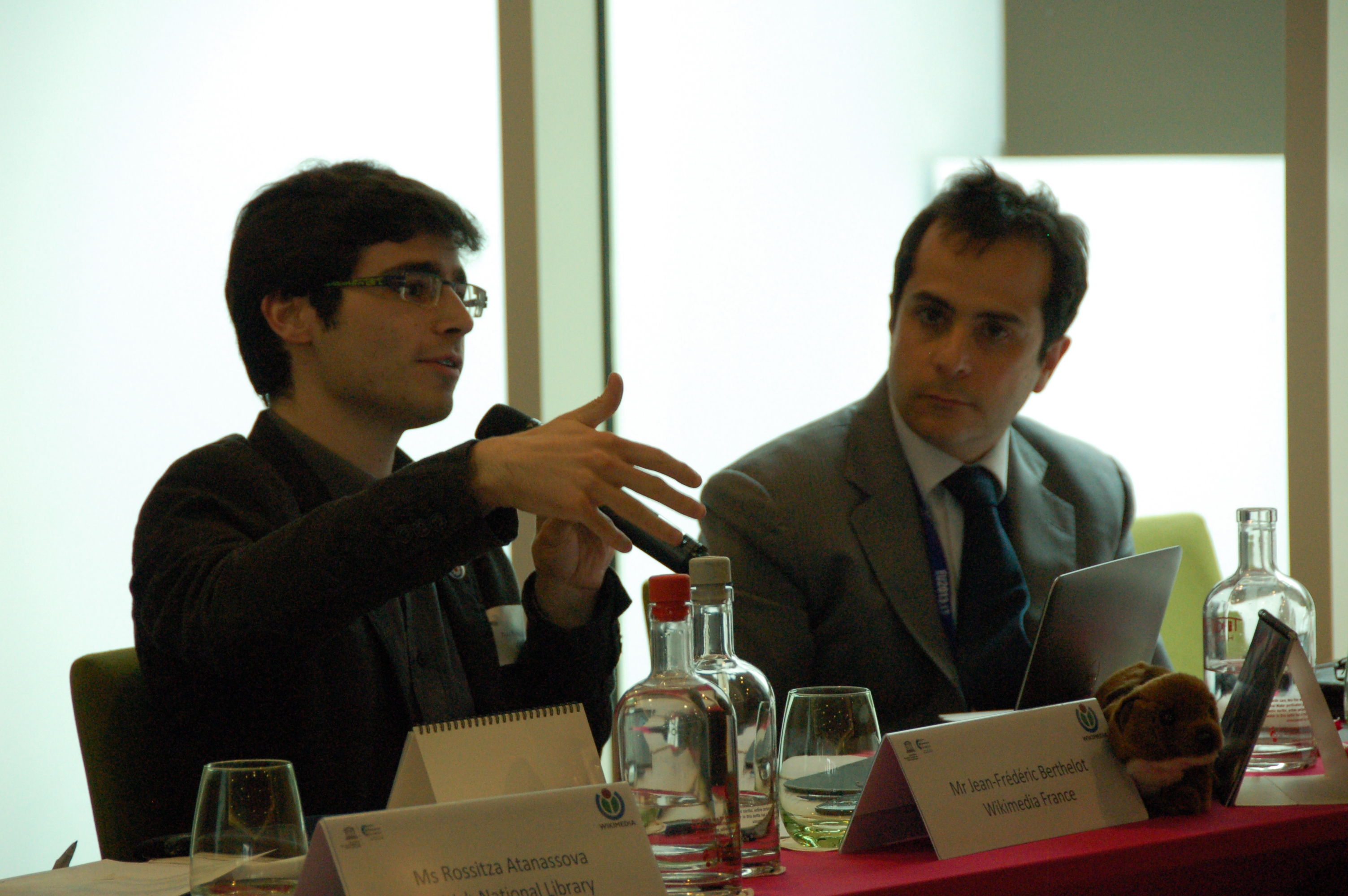 Further discussion topics included orphan works, a repeated call to shorten the copyright term and revise the Revised Berne Convention. Jeroen Walterus of the Flemish Centre for Digital Cultural Heritage “FARO” proposed a “cascading” model granting an automatic protection for the initial 20 years after creation, while further protection would be granted only after registration. Admittedly, chances for actually shortening the copyright term in the EU are rather slim. However, as a result of the copyright consultation at the event, we finally got the European Commission and part of the industry to participate in a conversation about this. So far the discussion has only revolved around prolonging the term. Are we witnessing a change of narrative? We will have to wait and see, but either way, it’s a step in the right direction.

What other methods can we practice to put our concerns on the political agenda and influence copyright legislation? This was the theme question for a two-day meeting of the Free Knowledge Advocacy Group EU, the working group of European Wikimedia Chapters that took place alongside the “Mass Digisitasion” event. The Big Fat Brussels Meeting Vol. 2 gathered 15 Chapter representatives and external supporters in order to refine our long-term strategy, imagine a stable organizational structure and draft concrete project ideas.
A decision was made to have other countries emulate an initiative by Wikimedia UK . Our British chapter sent all UK Members of the European Parliament a letter outlining our three core issues asking for a change in legislation. This helped them start the conversation with 6 out of the 72 MEPs. Another goal is to create and translate brief and clear brochures that illustrate complex matters like Freedom of Panorama or public domain for government works. These should then be distributed to all relevant decision-makers in the EU. Furthermore, it was agreed to stage – together with Creative Commons – an event around Open Educational Policy at the European Parliament toward the end of this year. This should, among other aims, help us increase our visibility in the newly elected European Parliament.

Only by bringing our international structure and our in-depth knowledge of the issues concerned –  at the right moment and at the right place – can we reach our self-proclaimed goal to have Wikimedia identified as a very transparent and coherent copyright expert for policy makers. The trick in running the Weasel-Lobster (Wikimedia activists-industry lobbyists) race is to convince the other side, at least partly, that our positions would be beneficial to them. We’ll need a lot of enthusiasm and even more brains to do that. The good news is that our international working group is growing. Now we just have to continue working in a steady dedicated manner. Just like we did with all the other projects.
Dimitar Dimitrov, Wikimedian