The logo of WikiProject Film

The English Wikipedia’s community-written newsletter, the Wikipedia Signpost, spoke to five members of WikiProject Film recently. One of the largest projects on the wiki, it boasts around 500 members and has existed for more than ten years. Its goal is to improve and manage articles directly related to film, the project’s main focus area. Though it has a broad scope, currently encompassing more than 100,000 articles, several smaller groups have split away to focus on narrower topics such as actors and screenwriters.
Those interviewed were Corvoe, Erik, Favre1fan93, NinjaRobotPirate and Lugnuts, all veteran editors possessing varying levels of experience. All five are, naturally, fans of film and share the common goal of improving Wikipedia’s coverage of film-related topics.
“Though I’d worked on music articles for a considerable amount of time beforehand, I’ve never felt more at home than at WikiProject Film,” says Corvoe, who has been a member of the project for a year. “Its collaborations far outweigh its solo ventures, and there are a large amount of us just wanting to improve as many articles as much as we can. I want others like me to have any amount of information that we can find at their fingertips, so that those as curious as I am have one centralized hub for any films they might be interested in.” 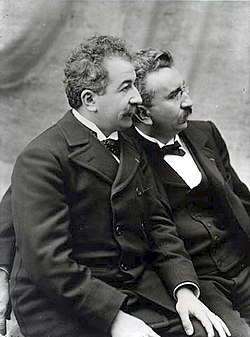 The Lumiere brothers. Auguste and Louis Lumière are credited to be the first filmmakers in history.

The project currently contains 239 featured articles, articles which have been carefully vetted by the community and deemed to be among the best on Wikipedia. It also covers 633 good articles which went through a similar, if less rigorous, process. Erik, who has been a user on Wikipedia since late 2005, has contributed to a number of pieces of audited content, though he says the process can be difficult.
“It takes a lot of work to truly research a film,” he says. “Older featured articles about films were usually based on online sources and did not often incorporate books as references. It’s a challenge to go that above and beyond since resources can be hard to access and since we have only so much time to devote to what is essentially a hobby for most of us.”
Favre1fan93, a Wikipedian of two and a half years, is a member of the comic book films task force—one of the many smaller “sub-projects” within the umbrella of WikiProject Film. He says that working with like-minded users makes the editing process easier.
“The members of that group all have a similar work ethic and I can look to many of them to be adding content to these pages to help make it a simple process to nominate it for GA status,” he explains. “In my opinion, this is the genre of film right now, so I try to take pride in have fulfilling articles for these very popular films.”
Dealing with vandalism and points of view is a big task which also falls into the project’s remit. “Most people are reasonable when I contact them on their talk page, and a few have been downright friendly and helpful once I politely explained my issues with their edits,” says NinjaRobotPirate. “However, I have run into publicists, filmmakers and vandals who were immensely frustrating to clean up after.”
Above everything, though, the end goal is to make Wikipedia’s content better. Erik says the website’s strengths are in the amalgamation of numerous sources into one solid whole. “If you work to make a film article comprehensive, you are basically making that web page the best place anywhere to read about a film. It’s a satisfying feeling to put together all these details and see how many readers learned new things about the film.”
For more info on WikiProject Film, read the full interview on the Signpost, or go to the WikiProject’s overview page.
Joe Sutherland, communications volunteer