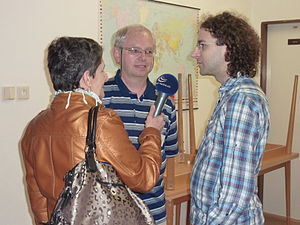 Esperanto Wikipedia started its journey in 2001. Within the past thirteen years Esperanto Wikipedia has registered a massive growth with a record 196,923 articles[1] – an editing landmark which places it in the forefront of not only other constructed languages but also many natural languages.
As a constructive language, Esperanto has been adopted out of love for its inherently uniform grammar as well as the idea of a culturally neutral universal language. In the context of Esperanto Wikipedia, we find people from different parts of the world enthusiastically contributing.
It is with this global framework in mind that I made a humble effort to survey Esperanto Wikipedians in an effort to get an overview of the editing culture of this Wikipedia and the whereabouts of its contributors. I designed a 10-point questionnaire and sent it to a number of Esperanto Wikipedians. To my good fortune, the first recipient, Christian Bertin, provided an Esperanto version of the questionnaire making it possible to give respondents the option to reply either in Esperanto or English. I received 12 responses from Esperanto Wikipedians including three responses from admins.
Although all respondents did not disclose their geographical location, those who did hailed from Austria, Colombia, France, Portugal, Czech Republic, Spain and the United States. Three respondents were inspired by the efforts of the founding member of Esperanto Wikipedia, Chuck Smith, to promote Esperanto Wikipedia, with one respondent, Miroslav Malovec, sharing a close association with him.
Esperanto Wikipedians contribute on a wide array of diverse topics – from local information, transportation, writers, sports, literature, film, food, Esperanto events, Russian ethnography, American culture, geography, ornithology and other areas of biology and science. Two of the respondents, Pino and Miroslav Malovec, made a point to mention outreach events for Esperanto Wikipedia. Miroslav Malovec listed Esperanto Wikimania 2011 in Svitavy, Czech Republic, Conference on the Application of Esperanto in Science and Technology 2012 in Modra, Slovakia and Wikitrans 2013 in Partizánske, Slovakia as examples of outreach events. Another Wikipedian, Marcos Crammer, mentioned an interesting anecdote where he attended the Conference on the Application of Esperanto in Science and Technology 2010 in Modra, Slovakia where he encountered an Esperantist who had been frustrated by Esperanto Wikipedia because of a terminological error which remained unaddressed. Marcos suggested a proposal to change the terminology and later carried out the change, providing his Esperantist friend with a more positive outlook.

When asked about potential problems surrounding Esperanto Wikipedia, Scott Starkey, an Esperanto Wikipedia admin, point out that a major problem is that almost all Esperantists know Esperanto as a second language. Because of this, poor grammar occasionally sneaks into articles along with neologisms. A simple solution to this would be that every new Esperanto Wikipedian stick to their individual ability level and ask fellow community members for help when needed. The best thing about the Esperanto Wikipedia group is that it is eager to help, even when it comes to small things like helping a new user figure out how to translate something from their native language into Esperanto. Scott also points out that in 2006-2007 there was an unnatural growth of articles on Esperanto Wikipedia due to the use of bots with automatic translations and uploads. The grammar was stilted, messy with some articles seeming abandoned. In 2007 the Esperanto community banned the use of bots to create articles. This inherently slowed down the rate of article-growth, but helped Esperanto Wikipedia grow in a natural and qualitative manner. He also showed the link of the second list of “must-have” articles being worked out on Esperanto Wikipedia:
The interface messages for Esperanto seem to be well translated on Translatewiki.net. The respondents seem to be comfortable with the ease of typing on Esperanto Wikipedia, especially for Esperanto letters (Ĉ, Ĝ, Ĥ, Ĵ, Ŝ, Ŭ). A positive aspect here is that a user does not have to search for “ĝ” to type “ĝi” (it) rather he can use the Esperanto X-system and just type “gxi.” The page will automatically display the word once it is saved. In the case that “x,” which is not an Esperanto letter, needs to be displayed, then it should be typed twice. However, this also presents a few problems – Simon Peter Hughes points out that he once wanted to add an external link to an online Esperanto translation of “The wizard of Oz.” It wasn’t possible because there was a “cx” in the web address, which was automatically corrected to a “c” with a circumflex. Thus, the problem of referencing Esperanto website addresses with “X” system needs to be looked into and addressed. Two other suggestions were made evident in the survey – additional support for the usability of Wikidata as well as making more referenceable content accessible in Esperanto seemed to be among the biggest concerns.
A big positive of Esperanto Wikipedia revealed in the survey is that it is largely free from Edit-wars. Senior users and admins are extremely supportive and like to extend a helping hand to all new users in understanding the language grammar as well as Wikipedia’s editing rules. I am enthusiastic about Esperanto Wikipedia’s growth and continued positive and friendly community.
I would like to thank all Esperanto Wikipedians for their valuable input and information used in this Survey.
Syed Muzammiluddin, Wikipedian, Esperantist, Urdu translator of Prague Manifesto of the Movement for the International Language Esperanto