The weather was almost as hot as it was in Hong Kong one year ago. But whereas on that occasion a time machine had to catapult the audience ten years into the future, at the event held on Sunday, July 6 at the Jewish Museum Berlin, the future had already arrived. 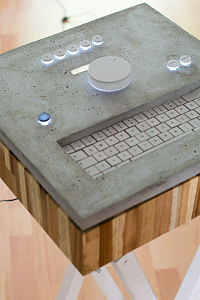 It was not only virtual results that were presented at the award ceremony for the culture hackathon Coding da Vinci in Berlin. Image from Marius Förster © cc-by-sa 3.0

At the final event of the programming competition Coding da Vinci, seventeen projects were presented to both a critical jury and the public audience in a packed room. Five winners emerged, three of whom used datasets from Wikimedia projects. This result signals that the predictions put forward by Dirk Franke in Hong Kong have already become a reality: that in the future more and more apps will use the content of Wikimedia projects and that the undiscerning online user will barely notice where the data actually comes from. There is a clear trend towards providing information in a multimedia-based and entertaining way. That’s the meta level, but the source of the knowledge is still clear: Wikipedia.
The aims of Coding da Vinci
The new project format used by Wikimedia Deutschland (WMDE) for the first time this year ended successfully. Coding da Vinci is a culture hackathon organized by WMDE in strategic partnership with the German Digital Library, the Open Knowledge Foundation Germany and the Service Center Digitization Berlin. Unlike a standard hackathon, the programmers, designers and developers were given ten weeks to turn their ideas into finished apps. Most of the 16 participating cultural institutions had made their digital cultural assets publicly available and reusable under a free license especially for the programming competition. With the public award ceremony on July 6 at the Jewish Museum, we wanted to show not just these cultural institutions but also what “hackers” can do with their cultural data. We hope that this will persuade more cultural institutions to freely license their digitized collections. Already this year, 20 cultural data sets have been made available for use in Wikimedia projects.
Exciting til the very end
It was an exciting event for us four organizers, as we waited with baited breath to see what the community of programmers and developers would produce at the end. Of course, not all the projects were winners. One of the projects that did not emerge as a winner, but that I would nevertheless like to give a special mention, was Mnemosyne – an ambitious website that took the goddess of memory as its patron. We are surely all familiar with those wonderful moments of clarity as we link-hop our way through various Wikipedia pages, so who would say no to being guided through the expanse of associative thought by a polymath as they stroll through a museum?
The polymath as a way of life died out in the end of the 19th century, according to Wikipedia – a fact that the Mnemosyne project seeks to address by using a combination of random algorithms to make finding and leafing through complex archive collections a simpler and more pleasurable activity. In spite of some minor blips during the on-stage presentation, the potential of the cast concrete Mnemosyne was plain to see. Hopefully work will continue on this project and the developers will find a museum association that wants to use Mnemosyne to make their complex collections available for visitors to browse.
The five winners
After two hours of presentations and a one-hour lunch break, the winners were selected in the five categories and were awarded their prizes by the jury.
Out of Competition: The zzZwitscherwecker (chirping alarm clock) really impressed both the audience and the jury. It’s a great solution for anyone who finds it difficult to be an early bird in the morning. That’s because you can only stop the alarm if you’re able to correctly match a bird to its birdsong. You’re sure to be wide awake after such a lively brain game.

Funniest Hack: The Atlas beetle is a real Casanova. It inspired IT enthusiast Kati Hyppä and her brother to build not only a dancing Cyberbeetle, but also an accompanying hi-tech insect box. We’ll see if the Museum für Naturkunde (museum for natural sciences) incorporates the project into its entomology exhibition. The jury was enchanted by the dancing beetle and awarded its creators the prize for Funniest Hack.
Best Design: The prize for most impressive design went to Ethnoband. The organ was the inspiration behind this project. The inventors of the organ packed a full orchestra in the pipes of just one instrument. With Ethnoband, Thomas Fett has made it possible to conduct an orchestra with instruments from all over the world using a computer. You can also invite friends from around the world to a jam session.
Most Useful: In this category, it was important to come up with an idea and strategy that would make the jury wonder why nobody had ever come up with this idea before. Insight – 19xx excelled at this almost impossible task. It is based on a list of names of authors ostracized by the Nazis and linked with additional information, from Wikipedia and other sources. This turns the list of mere names into intriguing biographies that are an engaging introduction to the author’s work. During the project it emerged, among other things, that a total of almost 20,000 books had been put on the prohibition list by the Nazis – a number much greater than previously estimated.
Most Technical: The app Alt-Berlin (old Berlin) impressed the jury on account of its great level of technical sophistication. In the app, the digitized collection of paintings from the Stadtmuseum Berlin, which hosted a Wikipedian in Residence in 2012, illustrates modern OpenStreetMap maps. Anyone wanting to experience time travel can discover historical maps along the streets of today. Even current images from Wikimedia Commons can be laid over old photographs of the streets of Berlin. You will soon be able to easily access the app from your cell phone while out and about.
All applications have a free license and can be further developed and reclassified accordingly.

Thank you to everyone who took part in Coding da Vinci! Photo: Volker Agueras Gäng, CC-BY 3.0

Looking to 2015 Next year, we would once again like to invite the programming community to participate in our culture hackathon Coding da Vinci. We hope to attract more cultural institutions, programmers and designers, to receive more data and to produce more creative projects; but more than anything we hope to help increase accessibility to the digitized cultural heritage that has already been made available. Our aim is to fully integrate this data into Wikimedia projects so that they can be used directly by all volunteers working on these projects.
Photographs from the event can be accessed from the Wikimedia Commons page. Photos of the award ceremony will be posted soon.