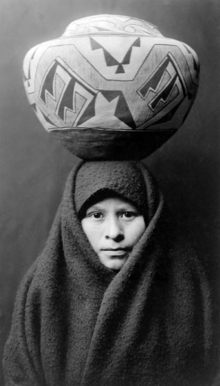 A Zuni girl with a pottery jar on her head, photographed in 1909. Most Zuni live in Zuni Pueblo in southern New Mexico.

Wikipedia’s community-written newsletter, The Signpost, recently talked to a number of participants in WikiProject Indigenous Peoples of North America. Encompassing more than 7,000 articles, the project currently boasts sixteen featured articles—articles that have gone through a thorough vetting process and are considered some of the best on the encyclopedia—as well as 63 WikiProject good articles, which have been through a similar, though less rigorous, process. The WikiProject aims to improve and maintain overall coverage of the indigenous peoples of North America on Wikipedia.
Members CJLippert, Djembayz, RadioKAOS, Maunus and Montanabw were asked for their thoughts on various aspects of the project. All five have a strong interest in the topic, though not all have direct ties to the indigenous peoples of North America. CJLippert, who works for the Mille Lacs Band of Ojibwe, a federally recognized American Indian tribe in Minnesota, comes pretty close. “Minnesota is a cross-road of where the Indian Removal Policy ended and Reservation Policy began and where the old and small Reserve system and the new and large Reservation system intersect,” he explains.
He adds, “As I work for a Native American tribal government, though not Native but also not ‘White’, I have the privilege of participating as the third party between the two. This also means I get to see both the strengths and weaknesses of both in regards to the relations between the Native Americans and the majority population. As that third party, trying to help to close some gaps in understanding is what led me to participate in Wikipedia and then to join the WikiProject.”
Maunus, a linguist and anthropologist, focuses on Mexican indigenous groups, which he feels is an underrepresented topic area on Wikipedia. “I am one of the only people doing dedicated work on these groups, but I have been focusing on languages and I agree that Mexican indigenous people require improved coverage compared to their Northern neighbors,” he says. “There are some articles on the Spanish Wikipedia of very high quality, mainly because of the work of one editor, but likewise other articles that are of very poor quality, with either romanticizing or discriminatory undertones. They also tend to use very low quality sources.” 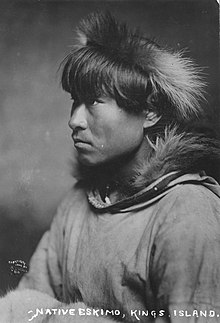 An Iñupiat man, photographed in 1906. There are an estimated 13,500 Iñupiat in north and northwest Alaska.

He is not the only contributor keeping his focus precise. RadioKAOS lives in Fairbanks, Alaska, an “intersecting point for a variety of distinct groups of Alaskan Natives” thanks to its position as the second-largest city in the northernmost state. Finding information on these rural communities, however, can be a challenge given the areas lack of online coverage. “Because a large part of what constitutes sourcing on Wikipedia is web-based and/or corporate media-based, coverage is hamstrung by the lack of any media outlets in scores of small, rural communities throughout Alaska,” he says. “Look at the ‘coverage’ of many of these communities and you’ll see that the articles are little more than a dumping ground for the Census Bureau and other public domain data that provide little or no insight as to what life there is like. Most attempts to provide factual insights of rural Alaska wind up deleted due to lack of [online] reliable sources.”
Montanabw, an editor of over eight years with a catalog of featured and good articles, says systemic bias is a big issue throughout Wikipedia’s coverage of indigenous peoples. “My first concern is use of language and phrasing that treats Native People like they are merely interesting historic figures instead of a living, modern people with current issues and current leaders,” he adds. “My second concern is uninformed, and at times inadvertently insulting, use of terminology in articles. For example, not all Native leaders are called ‘chief,’ yet many biographies labeled certain people this way even though it was not an appropriate title for that person.”
He adds, “Respect for a living culture and living people is not ‘political correctness,’ and it is frustrating to run across that attitude.”
For more info on WikiProject Indigenous Peoples of North America, read the full feature on the Signpost, or go to the WikiProject’s overview page.