Since Wikipedia’s gender gap first came to light in late 2010, Wikipedians have taken the issue to heart, developing projects with a focus on inclusivity in content, editorship and the learning environments relevant to new editors.
Wiki Loves Pride started from conversations among Wikipedians editing LGBT topics in a variety of fields, including history, popular culture, politics and medicine, and supporters of Wikimedia LGBT – a proposed user group which promotes the development of LGBT-related content on Wikimedia projects in all languages and encourages LGBT organizations to adopt the values of free culture and open access. The group has slowly been building momentum for the past few years, but had not yet executed a major outreach initiative. Wiki Loves Pride helped kickstart the group’s efforts to gather international supporters and expand its language coverage.
Pride Edit-a-Thons and Photo Campaigns Held Internationally
We decided to run a campaign in June (LGBT Pride Month in the United States), culminating with a multi-city edit-a-thon on June 21. We first committed to hosting events in New York City and Portland, Oregon (our cities of residence), hoping others would follow. We also gave individuals the option to contribute remotely, either by improving articles online or by uploading images related to LGBT culture and history. This was of particular importance for users who live in regions of the world less tolerant of LGBT communities, or where it may be dangerous to organize LGBT meetups. 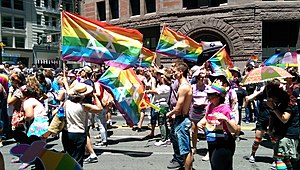 In addition to New York City and Portland, offline events were held in Philadelphia and Washington, D.C., with online activities in Houston, Seattle, Seoul, South Africa, Vancouver, Vienna and Warsaw. Events will be held in Bangalore and New Delhi later this month as part of the Centre for Internet and Society’s (CIS) Access to Knowledge (A2K) program. Other Wikimedia chapters have expressed interest in hosting LGBT edit-a-thons in the future.
Campaign Results
The campaign’s “Results” page lists 90 LGBT-related articles which were created on English Wikipedia and links to more than 750 images uploaded to Wikimedia Commons. Also listed are new categories, templates and article drafts, along with “Did you know” (DYK) hooks that appeared on the Main Page and policy proposals which may be of interest to the global LGBT community. 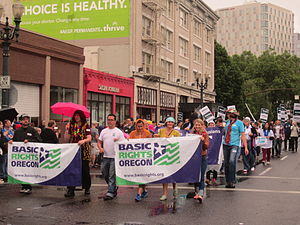 Pride parade in Portland, Oregon in 2014

The campaign also attracted participation from Wikimedia projects other than Wikipedia. Wikimedia Commons hosted an LGBT photo challenge, which received more than 50 entries and an LGBT task force was created at Wikidata. So far the group, which also seeks to improve LGBT-related content, has gathered 10 supporters and has adopted a rainbow-colored variation of the Wikidata logo as its symbol.
Continuing Efforts
Our hope is that the campaign will continue to grow and evolve, galvanizing participation in more locations and in different languages. Wiki Loves Pride organizers will continue to provide logistical support to those interested in hosting events and collaborating with cultural institutions.
Contiguous with the events of Wiki Loves Pride, Wikimedia LGBT has an open application to achieve user group status from the Wikimedia Affiliations Committee and looks forward to expanding its members and efforts on all fronts.
Jason Moore, Wikipedian
Dorothy Howard, Wikipedian