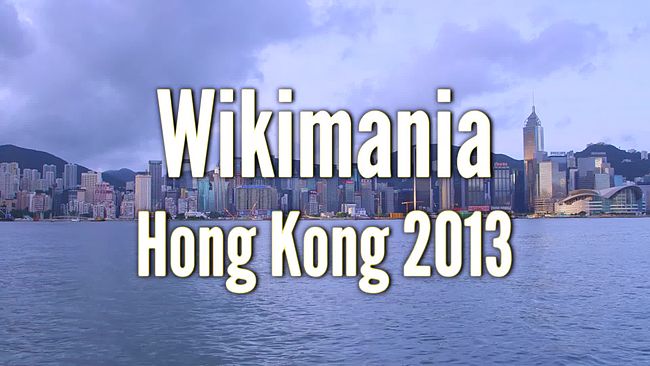 This is a short documentary about Wikimania 2013 in Hong Kong. You can also view it on YouTube.com here and Vimeo.com here. A version without burned-in English language subtitles is available on Wikimedia Commons here.

Wikimania is the annual global gathering of Wikimedians. To me, it feels like the United Nations moved to Github. It feels like the future of civilization. You get to meet people who have become empowered by human-computer symbiosis. Like any convention or meetup, Wikimania is also an ode to serendipity – there’s no accurate way to predict or measure what the dynamics or the outcomes of it will be.

Interviewing at Wikimania in 2013

Last year, I went to Wikimania in Hong Kong to shoot a documentary about the annual convention (film above). A little background – in 2012, my team and I interviewed as many people on camera as we could at Wikimania in Washington D.C., because Wikimania is where you can find the highest diversity and concentration of Wikimedians in the same place at the same time, anywhere in the world. I’d say that maybe half of the people we talked to we hadn’t known before Wikimania. For that project, I decided to remove the convention from the story and focus exclusively on Wikimedians themselves and their personal testimonies. So, when I went to Wikimania in Hong Kong in 2013, I set out to do the opposite and shoot a short documentary that makes the convention itself the main character of the movie. I had a question in my head – if all these people can collaborate online, then why do they need to collaborate face-to-face? I wanted to make something that suggests an answer to that question that would also let you feel like you are an attendee at the conference.

The film above is just under thirty minutes long. I wanted to talk about topics like language and culture, copyright, Wikipedia in education, Wikipedia offline, the Visual Editor, Wikimedia Grants, Wikipedia Zero, demonstrate what a hackathon is, and basically show things that I thought were important to talk about; things you should know that you can learn from being at Wikimania. I couldn’t talk about everything of course, and I had to cut some stuff out. One interview that stands out to me that didn’t make the cut was a conversation with Christoph Zimmermann about the Public Domain Project in Switzerland. Their goal is to make an encyclopedia of music that exists in the public domain. They accept any turntable records that are old enough to be in the public domain in Switzerland and scan the records with a super expensive laser turntable and archive that recording on their wiki for public use.

My thanks to everyone who let me interview them for this film.

Wikimania 2014 in London is just around the corner. It will be the tenth Wikimania. If you’ve never attended Wikimania, and have the opportunity to, you should. It’s always exciting. I’ll be there this August looking for fresh faces to talk to. You can sign up for Wikimania here, and if you have ideas for things to do you can post them here. And if you can’t make it to Wikimania 2014, you can watch the movie above and get a sense of what Wikimania is all about.