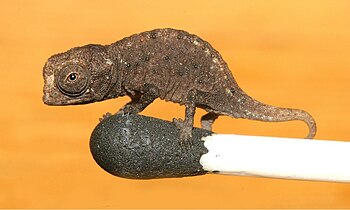 Open access image from the Public Library of Science.

Wikimedians have long been excited by the growth of the Open Access scholarship movement. Open Access scholarship has made vast amounts of images, video, and data available to the entire world, and in the process enriched Wikimedia projects as well. For example, over 2,000 images from the open access Public Library of Science are used in Wikipedia articles, including the adorable Brookesia micra to the right.
Unfortunately, some participants in scholarly publishing would like to water down “open access”, so that they get credit for being “open” while continuing to charge the public for access to knowledge. Today, we join fifty-five other open access groups in protesting the latest such attempt – publication of new “open” licenses that aren’t actually open.
These new licenses were written by the International Association of Scientific, Technical & Medical Publishers (STM). STM’s new “open access” licenses fail to meet the basic standards set out by the Freedom Definition and the Open Knowledge Definition. For example, they restrict commercial use, and in some cases even “competing” uses. They also restrict text and data mining, activities that should be permitted to ensure that researchers can grow and expand human knowledge.

The licenses also damage interoperability. Beyond being incompatible with reuse in Creative Commons-licensed works, two of the licenses are designed to be added on to other licenses, causing even more confusion. While the title says that they “add” rights, and the body speaks of “enabling” researchers, that is only true if the addendums are added to restrictive licenses that prohibit derivatives. If the addendums are combined with open licenses like Creative Commons Share-Alike licenses, the result would be a reduction of rights. Because these licenses and addendums are not compatible with our licensing policies, materials licensed under them cannot be uploaded to Wikimedia.
We join the Public Library of Science, Open Knowledge, and many other groups in urging STM to withdraw these licenses. We also urge publishers and authors who are considering these licenses to instead grow the knowledge commons by using standard, interoperable, open licenses like Creative Commons Attribution-ShareAlike and Creative Commons Zero.
Luis Villa, Deputy General Counsel at the Wikimedia Foundation